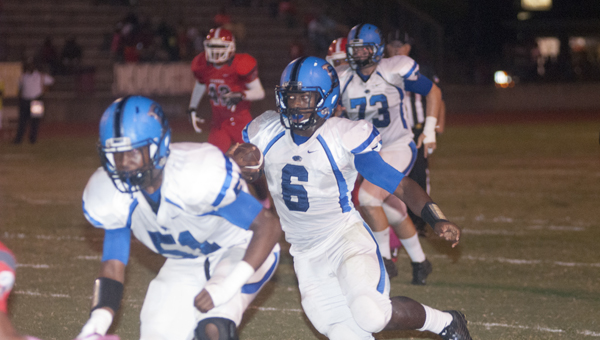 Jayjerein Craig follows his blockers on his way to a 36-yard touchdown reception as time expired in the first half.

The Demopolis Tigers improved to 6-1 overall and 5-0 in the region with a 42-16 win over Central-Tuscaloosa on the road Friday.

The Tigers rushed for 402 yards, 248 of which were gained by Rashad Lynch. The Tigers gained a total of 499 yards in the game.

“We had a really good first half,” DHS head coach Tom Causey said. “We came out kind of flat in the third quarter, but that’s a credit to what Central was doing. Our guys played hard all night. When we win, it’s because we play hard, and our guys played their tails off on offense, defense and special teams tonight.”

Demopolis opened the game on defense, and Central was able to move the ball through the air but ended their opening drive with a missed field goal. 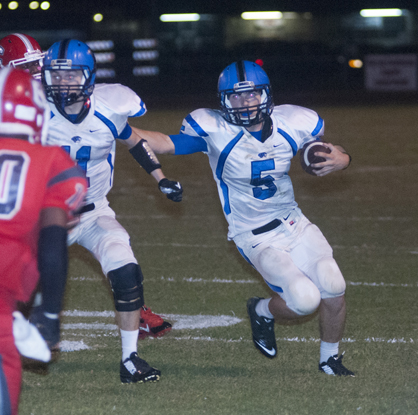 Demopolis quarterback Logan McVay finds a hole to run through.

On Demopolis’ first drive, Lynch broke a 50-yard run for a score. Tyler Overstreet’s extra point bounced off the goal post and the Tigers led 6-0.

The Tigers stopped Central on the next drive, and on the first play of the second quarter, Jayjerein Craig scored from 4 yards out. Logan McVay ran in the two-point conversion to give Demopolis a 14-0 lead.

A three-and-out by Central gave Demopolis the ball near midfield. After moving the ball inside the redzone, Lynch capped off the drive with a 17-yard scamper. Another Overstreet extra point attempt bounced off the upright, leaving Demopolis with a 20-0 lead.

Central drove down the field on their next drive, but Demetrius Davis intercepted a pass in the endzone to put an end to the Falcons’ threat.

After forcing a Demopolis punt, Central got on the board late in the first half on a 31-yard touchdown pass from Tyler Bell to Eldric Jones. Bell found Kendrell Walker in the endzone for the two-point conversion, making the score 20-8 with 36.6 seconds to play. 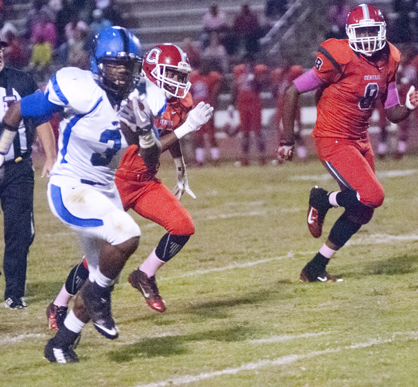 Demopolis responded and scored with zeros on the clock on a bubble screen from Logan McVay to Craig that went for 36 yards. McVay found Drew Jones in the endzone to convert the two-point conversion, putting Demopolis ahead 28-8 at halftime.

The teams held each other scoreless in the third quarter, then with 4:27 to play in the fourth, Lynch broke a 73-yard run for a score. Overstreet converted the extra point to put DHS ahead 35-8.

Central responded on their first play from scrimmage on a 66-yard run by Walker. The Falcons converted the two-point conversion to make the score 35-16.

Demopolis drove down the field and scored on a 7-yard Jones touchdown run to go ahead 42-16 after an Overstreet extra point.

“We were flat on both sides of the ball tonight,” Central head coach Dennis Conner said. “The first four or five drives, we couldn’t get a stop on defense. I really wish we could have punched it in on that first drive.”

Causey credited the offensive line for their work during the game.

“The offensive line plays hard, and they’re smart about what they do,” he said. “They’re putting their hats where they’re supposed to be.”

Lynch also credited his teammates on the line for his performance in the game.

“The offensive line is doing great,” Lynch said. “They opened up the holes for me, and I hit them.”

The Tigers will host Wilcox Central next week for homecoming.