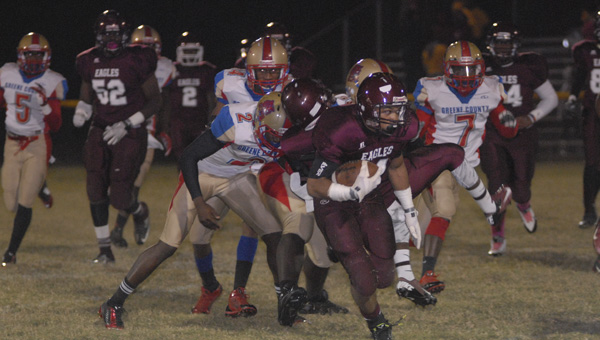 A.L. Johnson running back Mike Croom breaks through the line and looks for open space in Friday night’s game against Greene County.

It was a tale of two halves for the A.L. Johnson Eagles in their 60-26 loss to the Greene County Tigers on Friday.

The Eagles dropped their fourth straight game to close out the regular season.

ALJ came out strong to open the game and took a 20-16 lead into the locker room at halftime, but the Tigers came roaring back in the second half and pulled away from the Eagles.

“We were blocking and playing well in the first half, even though we were shorthanded with some suspensions and injuries,” ALJ head coach Johnney Ford said. “We fumbled the ball a whole lot in the second half and really shot ourselves in the foot. You can’t win football games like that.”

The Eagles opened scoring in the first quarter with a 40-yard touchdown run by Samuel Monroe. Zynell McGhee connected with Mike Croom on the two-point conversion to put the Eagles ahead 8-0 with 7:28 to play in the opening quarter.

Early in the second quarter, a 59-yard punt return by Greene County’s Devin Woods set the Tigers up with good field position, but the Eagles forced a three-and-out to regain possession deep in their own territory. 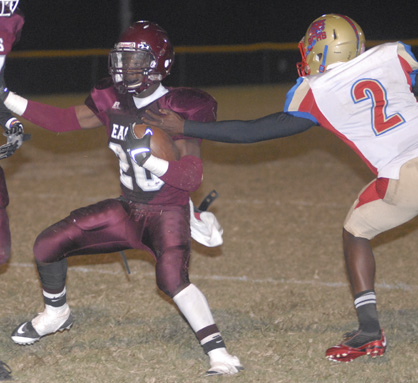 A series of turnovers eventually led to the Tigers taking possession at A.L. Johnson’s 26 yardl line. Terry Purse found Woods for a 26-yard TD pass, then Purse connected with Lanathan Harrod for the two-point conversion to tie the game with 5:57 to play in the half.

On ALJ’s next possession, Croom took a handoff 54 yards for a score to give the Eagles the lead once again. After a failed two-point conversion, the Eagles led 14-8.

Greene County responded with a big play of their own, though. Purse found Woods again, this time from 90 yards out, to even the score. The Tigers took the lead 16-14 on a two-point conversion.

With a minute left to play in the half, A.L. Johnson took a 20-16 lead on a 30-yard pass from McGhee to Jeremy Mitchell.

In the second half, it was all Greene County. The Tigers scored on a 26-yard pass from Kendarius Colvin to Purse, then on a 12-yard run by Denzel Davis to take a 32-20 lead through three quarters.

ALJ’s lone second half score came on an 82-yard kickoff return for a touchdown by Monroe with 9:31 to play in the fourth quarter.

Next week, the Eagles will travel to Fruitdale for the first round of the AHSAA Class 1A playoffs.

“Hopefully we’ll have everybody back, and we can focus on playing football next week,” Ford said.