Smith using talents to bless others 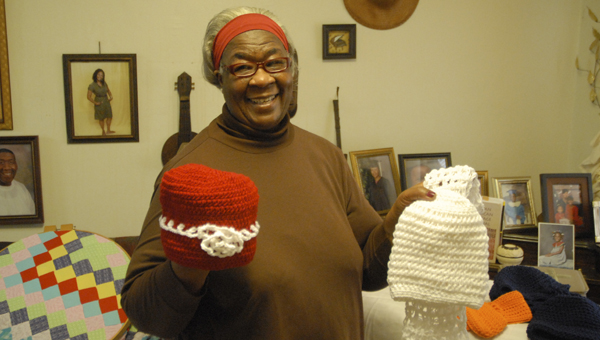 Sara Smith shows off a few of her creations, which she calls “God’s gifts of creation.” Smith said for 2015, she wants to bless those who are in nursing homes by making them caps, dress hats, scarves, bedroom slippers and more.

Sara Smith has been crocheting on-and-off for the better part of 45 years, but she recently picked it up again after a short break and hasn’t slowed down since.

Smith said she thought of a friend who was sick in the hospital and wanted to make something for her.

“I went back and found my yarn and just started crocheting,” she said. “I thought of my sick friend, and I made her something in just a couple of hours. After that, I went to the store and bought more yarn, and I’ve been at it ever since.”

When she was 14-years-old, she taught herself how to crochet and has learned how to make just about anything, including hats, scarves, gloves, slippers, quilts and more.

“God just showed me what to do,” she said. “I don’t use a pattern, I just start working on something and it comes together.”

She said everything she makes has a meaning behind it because of the color.

Smith said for 2015, she wants to bless those who are in nursing homes.

“I want to make caps, dress hats, scarves, bedroom slippers…whatever I can to bless them,” she said.

She added that she’s been crocheting for so long, most things that she makes only take her a few hours.

“I can make a hat or a headband in about two hours, and it takes me about three hours to make slippers,” she said. “I make a couple different kinds of scarves, and one of them takes me about and hour-and-a-half, while the other one takes about four hours. When I do quilts, they take a couple months, though. I’m looking at starting one soon.”

In addition to crocheting, Smith plays piano for her church, New Birth Outreach Ministry, located on Highway 43 South in Demopolis.

She said she feels that God has given her a gift, and she wants to use it to bless others in the community.