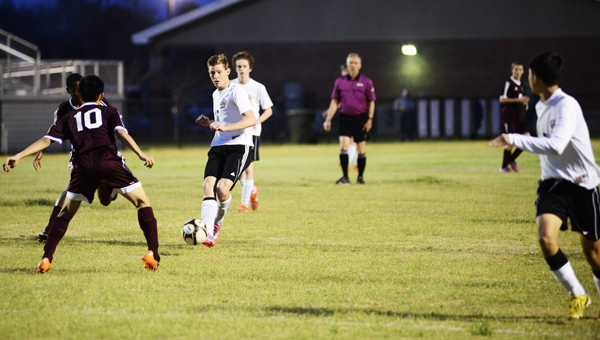 Adam Brooker passes ahead to his teammate Zachary Chu in Tuesday’s 6-1 win over Thomasville.

The Demopolis Tigers came out firing early against Thomasville in a soccer match Tuesday night and came away with a 6-1 win.

Austin Brooks led the way with a hat trick, and Adam Brooker added two goals for himself. Cristian Velez also added a goal in the match.

Brooker’s two goals came on long shots early in the match. His first came on a rocket just a little over two minutes into the game. He scored his second goal nearly 10 minutes into the contest on a shot that hooked in from the left side of the field.

Brooks scored two more goals for Demopolis before halftime to give the home team a 4-0 lead at the break.

Velez and Brooks scored in the first 15 minutes of the second half before Thomasville added a goal late in the half.

“Thomasville is a greatly improved team,” DHS head coach Brad Daniels said. “Our young guys were able to get a lot of playing time tonight, which is good for us going down the road. We made some mistakes that we need to work on. We need to let our speed get out and spread teams out.”

The Tigers are scheduled to play again Saturday at home against Andalusia at 1 p.m.