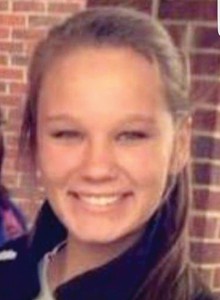 Students at Demopolis High School are returning to school Monday morning to the news that one of their own was killed in a vehicle accident Sunday morning.
Katie-Elizabeth Hope Vann, a 15-year-old sophomore at DHS and a resident of Gallion, was a passenger in a 2002 Ford Explorer when the vehicle left the roadway and overturned, according to the Alabama Law Enforcement Agency. The crash occurred at 9:20 a.m. on Interstate 59, near the 76 mile marker, about 1 mile east of Tuscaloosa. No other vehicles were involved in the crash.
According to ALEA, Vann was transported from the scene of the crash to DCH Regional Medical Center in Tuscaloosa where she was pronounced dead at 9:30 a.m. Officials said that Vann was not wearing a seatbelt when she was ejected from the vehicle.
Four others were injured in the crash, including the driver, Valorie Racheal Eicher, 16, of Alexander City who was also transported to DCH Regional Medical Center. Other passengers injured in the accident were Mycah Patrick, 14, of Pine Hill; Tristin Eicher, 15, of Newbern; and Cody Vallinger, 18, also of Newbern.
Counselors and local clergy will be on hand today at Demopolis High School to assist students. Van was a member of the DHS band program and the daughter of Tim Vann and Barbara Malone Hodge.