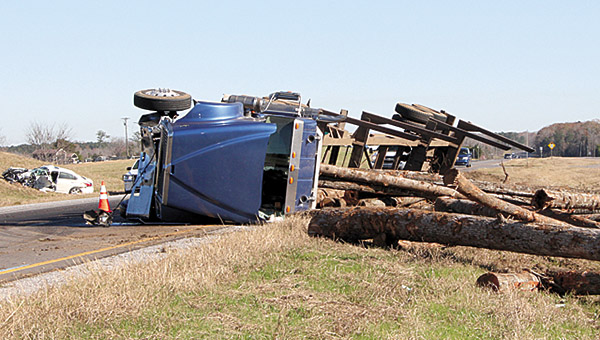 A truck carrying a load of logs spilled over into the median on Hwy. 80, west of Demopolis Tuesday morning after colliding with another vehicle. Both drivers were taken to the hospital with injuries.

Two people were transported to a local hospital Tuesday morning following a two-vehicle collision on Highway 80.
The crash occurred at approximately 10 a.m. Tuesday morning when, according to officials, a Nissan pulled onto the Hwy. 80 and was hit by a log truck just west of Demopolis. The drivers of each vehicle were transported to Bryan W. Whitfield Memorial Hospital with injuries.
The female driver of the Nissan was extricated from the vehicle by the Demopolis Fire Department.
The log truck was traveling west on Hwy. 80 and after striking the Nissan came to a stop on its side in the media, losing its load along the highway. The Demopolis Police Department assisted at the scene and directed traffic around the wreckage.
Alabama State Troopers will be investigating the crash. No other details was available as of press time on Tuesday afternoon.