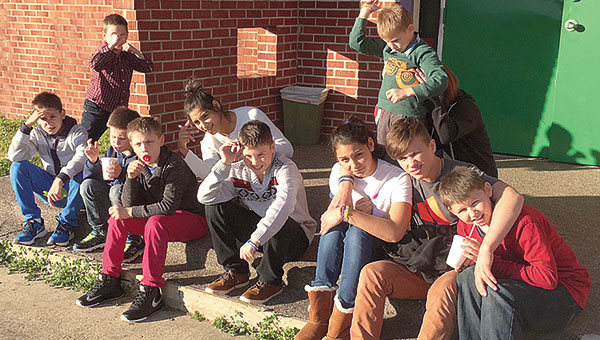 A group of 10 Ukranian orphans sit outside the Fun Factory in Linden Sunday afternoon. The group, along with members of the Bridges of Faith ministry, were guests of Thomaston Baptist Church this weekend.

A special group of young visitors spent some quality time in Marengo County over the past weekend.
Ten children ages 8 to 15, including two girls and eight boys, were the special guests of Thomaston Baptist Church on Sunday as part of a mission program designed to help Ukranian orphans.
The program is coordinated by Bridges of Faith International, an organization founded in 1996 by Rev. Tom Benz after witnessing the struggles of orphans in the Ukraine.
Every year, Bridges of Faith brings a group of Ukranian orphans to BridgeStone, a 140-acre retreat center near Clanton, Alabama to give the children a taste of American culture and to build a foundation of faith. Though the organization is not an adoption agency, sometimes families who meet these children will work with Ukranian officials to offer adoptive homes.
During the visits by these children, they experience much of what Alabama has to offer. The group who visited Marengo County this weekend had already experienced the Space and Rocket Center in Huntsville, the McWane Science Center in Birmingham, horseback riding, shooting, and even participated in Christmas parties. While in Marengo County on Sunday, the group visited Thomaston Baptist Church for morning services, had lunch at a Thomaston restaurant, traveled to Linden for an afternoon of skating, putt-putt golf and other games at the Linden Fun Factory, and were recognized during the evening services at Thomaston Baptist Church.
Benz said he recognized the need to help the children of the Ukraine during one of his visits to the country.
“I was in the Ukraine with the International Bible Society and while there saw what these children face,” Benz said. “While they are cared for in the orphanages, they receive only what they need to survive and once they graduate out of the orphanage, they’re future is bleak.”
According to Benz, once the kids graduate high school they are no longer wards of the state. At that point, each of those kids are at risk of becoming part of some dire statistics. He said 10 percent of Ukranian orphans will end up committing suicide as an adult and another 10 percent will likely go to prison. Among girls, six of every 10 will end up a victim of sex trafficking. “Only 10 percent of these children will grow up to have reasonably happy lives,” Benz said.
Through the Bridges of Faith ministry, Benz said these orphans are brought to America where they stay with host families and are provided a “Christian camp experience.” While Bridges of Faith hopes to foster long-term solutions for the children, they are not allowed to discuss adoption with the children while they are here. If a family would like to adopt one of the children, that family must work directly through the Ukranian government. According to Benz, 60 to 70 percent of the children who visit through the Bridges of Faith program will find a Christian home.
Thomaston Baptist Church got involved in the program when Pastor David Traywick heard about it from Brenda and Shane Tuck, members of the church who had previous involvement with the program.
“As a youth pastor for four years, I had expressed an interest in helping children and Brenda and Shane were acquainted with this program and told me about it,” Traywick said. “This has been a great experience for our church. We love seeing the kids laugh. This is what we are here for and we hope to have more contact with them.”
Brenda Tuck said being involved in the program is as much a blessing to her and her husband as it is for the children.
“We got involved through mutual friends and it has become something very dear to us. The opportunities these children have as orphans are not very good. We want to love them and show them love while they are here,” she said.
The children who visit do not speak English, but there is an interpreter, Nina Korliuk, and chaperones that travel with them from their native country.
Among those who visited with the group on Sunday were sisters, Estella, 15, and Zlata, 14.
“Everything is different here,” Estella said. “I really like skating and dancing and Christmas. I really like the people.”
Her sister, Zlata, said, “I’ve enjoyed everything about our visit to Alabama. We’ve learned a lot about God and met many new friends.”
Vadim, a 13-year-old boy, who celebrated his birthday on Saturday, said, “I’ve enjoyed everything on this trip, especially the golf.” He added that he likes that there is no snow here.
Traywick said Bridges of Faith allows an opportunity for anyone to get involved in a special mission.
“A lot of people cannot go overseas, but they can be a part of these kids’ lives. That’s as much a ministry as anything else,” he said.
Through the efforts of Bridges of Faith, Benz said there are many success stories for children who were once Ukranian orphans.
“This spring we received a bouquet of invitations to high school graduations … they were from those Ukranian orphans who found homes in the U.S. and are now graduating high school and going on to college. For me, there is nothing else I want to do. I can’t imagine doing anything else.”
As for those at Thomaston Baptist Church, enjoying the time they had with the children is something they cherish.
“There is a language barrier, but everybody understands a smile and a hug,” Tuck said.
The group passed on a special thanks to the Linden Fun Factory for providing a special afternoon of games, fun and smiles.