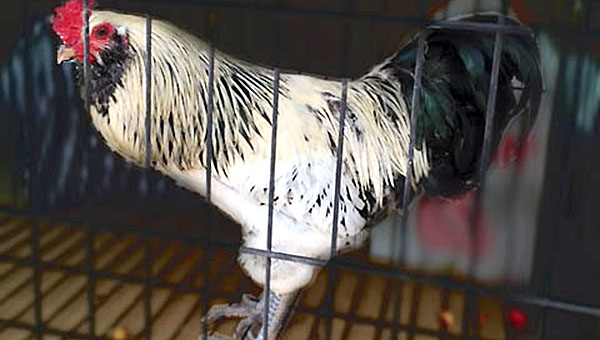 “Woodrow” will be one of the roosters up for auction during the inaugural Rooster Day event this Saturday. The rooster is named for President Woodrow Wilson who donated a rooster during a rooster auction in Demopolis in 1919.

When the first Rooster Auction was held in Demopolis in 1919 to build a bridge across the Tombigbee River, the event stretched over two days and involved thousands of people.
The inaugural Rooster Day April 9 will commemorate that first event, but more than roosters will be up for bid. This year, instead of a bridge, the Marengo County Historical Society is holding an auction to make needed repairs on its two historical home, Bluff Hall and Lyon Hall.
To close a full day of activities doors at Lyon Hall will open at 6 p.m. for ticket holders to have a fun evening of bidding on both big and small ticket items, dancing and enjoying good food. Entry fee is $15, and bidding begins at 7 p.m.
No Rooster Auction would be complete without having a rooster to auction. A full bred Americana rooster, raised by Ken Gilliam of Gordo, will be the first item up for live auction.
The rooster is named “Woodrow” in honor of President Woodrow Wilson who donated a rooster for the 1919 auction. The winner has the choice of accepting Woodrow or a rooster painting by Kirk Brooker.
At the first Rooster Auction, Helen Keller donated a Little Blue Hen for bid. Auction chairman Diane Brooker has lined up a Blue Hen for this year’s event as well.
Being a part of Rooster Day “has been one of the most exciting events I’ve ever worked on because the enthusiasm has been so great from everyone involved,” she said.
More than fowl will be auctioned that night. Another big ticket items is an evening of cocktails and hors d’oeuvres for a party of no fewer than 14 guests at one of Demopolis’ premier historic homes owned by John Cox Webb. Also up for bid are two nights at the Roosevelt Hotel in New Orleans; wine tasting, courtesy of John and Jane Wallace, and a package of art classes and cupcakes, donated by Kirk Brooker and the Canebakery.
Three exclusive hunting packages are being offered as well: a turkey hunt at Owensby Plantation, quail hunt at Camp Chapron and “skeet and eat” at Soggy Bottom Lodge.
Those attending are being encouraged to form groups to bid on the major items. Sealed bids can be submitted in advance, and phone bids will be accepted. If a bidder cannot attend, he may designate a friend to bid on his behalf by phone.
An array of silent auction items will be up for bid, gathered by Katharine Glass and Amanda Hall. Paintings, photographs, a hand-carved Brewster the Rooster walking stick, and sculptures are among the articles to be sold to the highest bidder.
Others are pizza for a year, tickets to theatrical productions, manicure and pedicure, massage, framed posters, photo shoot, a Yeti cooler, a framed tapestry, lamps, painting classes, numerous gift certificates and even two spots on the lead Christmas on the River Day Parade float.
ARTS award winner Mark Abrams, a Demopolis native and well known designer, has donated a pair of lamps and his Marengo Box from his Port 68 collection. Abrams’ home décor company specializes in accent furniture and home accessories.
In between all the bidding, the Elijah Butler Band out of Birmingham will play a blend of blues, rock and country. The band has shared the big stage with Kid Rock, The Marshall Tucker Band, Charlie Daniels Band, and The Outlaws.
For more information on Rooster Day or to purchase tickets to the auction, contact Kirk Brooker, executive director of the MCHS, at 334-216-5475.