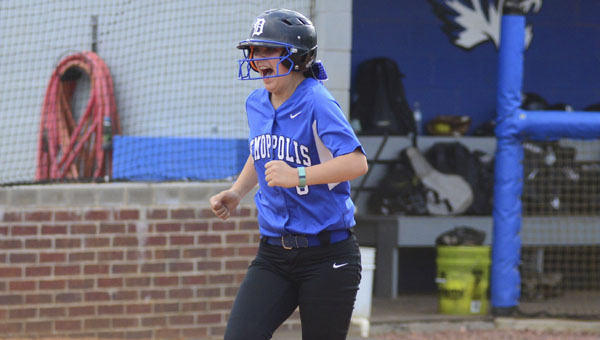 Anna Katherine Aldridge celebrates her first home run of the season during the
17-2 victory over Holt High School.

The Demopolis High School softball team scored runs in every inning on the way to a 17-2 victory over the Holt Ironmen on April 6 at DHS.

“We’re young, but hey, they’re showing up to the game and that’s all that counts right now,” said Demopolis coach Brittany Dunson. “We have gamers and we have practice players, but as long as they show up to the game then they’re good to go.”

The Lady Tigers (16-9) scored 17 runs on 10 hits, but the Ironmen committed seven errors to contribute to their own demise.

DHS opened up the lead in a big way in the bottom of the second, scoring 11 runs.
Abbey Latham started the action blasting a shot over the leftfield wall for a 3 RBI home run to score herself along with Smith and Adams.
A couple of batters later, Kendall Hannah hit a hard double on the ground to knock in two more runs.

Several players had two at bats in the inning and when it was all said and done, the Lady Tigers held a 13-0 lead.

Holt responded with two runs in the top of the third to avoid the shutout.

However, DHS answered back with two runs of their on in the bottom of the third when Elly Brown doubled to leftfield to score Hannah and Kayla Montz scored when Adams laid down the sacrifice.

Latham, who played at catcher and first base in the contest, finished 2 for 4 with 4 RBI with a home run to lead the team. She also stole two bases.
Courtney Smith, Adams and Hannah all had two hits and 2 RBI and Elly Brown also knock in two runs.

Montz (4-1) was credited with the pitching victory and finished with nine strikeouts while surrendering only two hits.

Dunson said about the pitching effort, “Kayla’s done a good job. She’s young, all of our pitchers are young. So for them to be able to come out and throw a full game it’s really good for us and for her to get some innings in today was a big deal.”