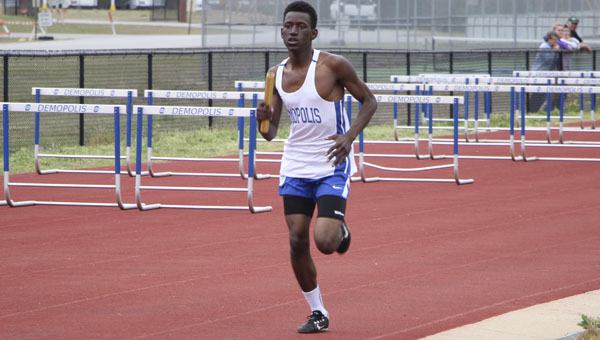 A total of 17 local high schools and one college attended the Demopolis Invitational track and field event on April 14 on the campus of DHS.

The Lady Tigers of the DHS track and field team dominated the competition finishing with 186.5 team points, which was over 100 points clear of the second place finisher, while the DHS boys finished just one point out of first place with a total team score of 115.5. Francis Marion won with 116.5 team points.

Ivory finished first in the 4 by 100 meter relay alongside Nykeria Grayer, Yasmein Rainey and Shy’shawna Smith. The team finished the relay in 51.02 seconds.
The team of Kate Floyd, Darnesha Harris, Yasmein Rainey, Keshunda Walker and Keyjana Waller took victory in the 4 by 400 meter relay with a time of 4 minutes and 33.55 seconds and cleared the competition by 18 seconds.

The Lady Tigers came away victors in the 4 by 800 meter relay as the team of Audrey Boykin, Anna Caroline Logan, Caitlin Thrash and Keyjana Waller finished the race in 11 minutes and 40.37 seconds.

Keyjana Waller took home a third first place finish in track competition with a win in the 800 meter run with a time of two minutes and 44.64 seconds.
Darnesha Harris came in first place in the triple jump with a distance of just over 32 meters.

Samantha Williams had great day as well winning the shot put with a throw 30.7 meters. Williams also finished second in the discus.

Eddie Jones claimed victory in 800 meter run with a time of two minutes and 15.78 seconds.

In team track events, Rembert and Jones joined forces with Cameron Crawford and James Jones to win the 4 by 400 meter relay in three minutes and 49.86 seconds.

Eddie Jones, Rembert, Woods and Tyler Ward claimed victory in the 4 by 800 meter relay in nine minutes and 30.28 seconds.

Next on the schedule for DHS track and field are the class sectionals in Mobile hosted at McGill Toolen High School taking place during April 29 and April 30 in the Gulf Coast city.
With a good performance, DHS could qualify for the state meet which will take place in Gulf Shores starting on May 5 and lasting through May 7.