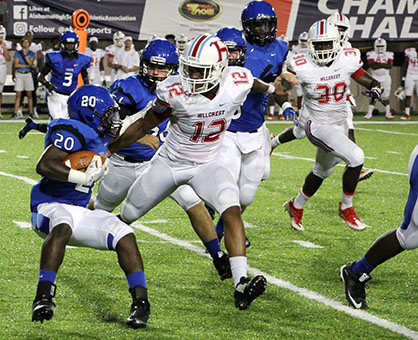 A.J. Besteder looks for running room against the Hillcrest-Tuscaloosa defense in the season opening game for Demopolis Thursday night in Montgomery.

The Demopolis Tigers stumbled out of the gate into the 2016 football season in a lopsided loss to Hillcrest-Tuscaloosa in the AHSAA Champions Challenge game Thursday night at Montgomery’s Cramton Bowl.
The Tigers could not find a defensive answer to the Patriot offense, which found success on both the ground and through the air on the way to a 42-0 lead at the half. Demopolis would score late in the game to avoid the shutout with a final score of 42-7.
The Patriots received the initial kickoff of the 2016 season and wasted little time scoring the first touchdown of the season. After driving the ball to the DHS 39-yard line, HTHS quarterback Torin Mayhew found Cole Frederick alone behind the defense for the score. The point-after failed, giving the Patriots a 6-0 lead.
Demopolis’s special teams did not help the cause in the first half, having a botched snap on a punt attempt that led to a safety on its first possession of the season. Later in the half, a blocked punt followed by a misplayed kickoff return led to turnovers and good field position for Hillcrest.
The Patriots’ highly-touted runningback Brian Robinson had 55 yards in the first half and saw very limited action in the second half. He scored from six yards out mid-way through the first to increase the Patriot lead to 15-0 following the extra point.
With the offense sputtering, things got worse for the Tigers as Hillcrest blocked a punt at Tiger 19-yard line. The Patriots would score on a 10-yard pass into the endzone, increasing its lead to 35-0.
Hillcrest’s final score of the half — and the game — came on the ensuing kickoff that dropped short of a would-be returner leading to another turnover and great field position for the Patriots at the 23-yard line. Robinson would rush into the end zone on a third-and-nine play with just over 3 minutes to go in the half, giving the Patriots a 42-0 advantage.
Demopolis’s best drive of the half came down the stretch. A.J. Jackson, who led the team in rushing with 74 yards on the night, got the drive started with a 5-yard run followed by a 4-yard gain by Percy Cistrunk. On fourth-and-one, Jackson kept the Tigers’ drive alive with a 10-yard gain to the 45. With 34 seconds to go in the half, quarterback Logan McVay was looking downfield when he stepped up in the pocket between two defensive rushers where he found open field for a 42-yard gain, the biggest rush of the game by either team. A sack and the clock worked against the Tigers efforts to score before the half.
The Tigers would score their only touchdown of the game with about 5 minutes remaining when A.J. Jackson scored on a 7-yard run. Clay McVay’s PAT made the final score 42-7.
Jackson led all rushers in the game with 74 yards. Logan McVay added 48 yards for the Tigers.
Demopolis finished the evening with 203 total yards while the defense surrendered 274 to Hillcrest. Demopolis had a total of 151 rushing yards, adding 52 passing yards.
Russ Logan led the Tiger defense with nine tackles with Tavian Brown adding seven, including three for losses.
The Tigers will have its home opener next week against Greensboro with kickoff at 7 p.m.