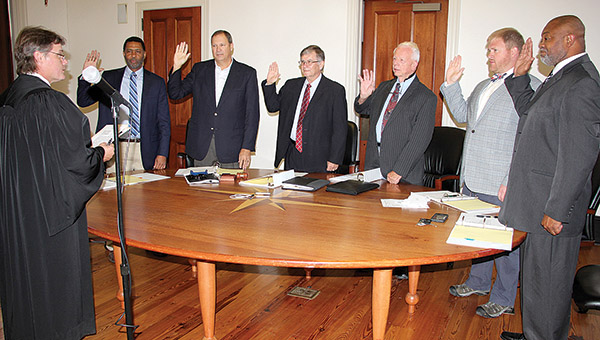 The new mayor and city council for the City of Demopolis took their official oath of offices Monday morning and held the first meeting with Mayor John Laney the same day.
Along with Laney, city council members were also sworn into their offices, which did not change during the city election. Councilmembers include: Charles Jones Jr., District 1; Nathan Hardy, District 2; Harris Nelson, District 3; Bill Meador, District 4; and Cleveland Cole, District 5.
“I want to say what a pleasure it is be be here,” Laney said. “I’m thanful to the citizens of our community and I feel very fortunate to be working with the others here. I know everyone has the best intentions for Demopolis.”
Following the oath of office, the council held an organizational meeting. During that meeting the time and date for regular council meetings were determined and they will continue to be held the first and third Thursday of each month, at 5:15 p.m., at Rooster Hall.
Councilman Jones was also approved by vote to serve as Chairman Pro Tempore.
The council also approved other measures to set up for the new administration, including the establishment of committees, ratifying depositories, appointing administration officers for the city, and authorizing Laney signatory power for the city.
While City Attorney Bill Poole was re-appointmed as an administrative officer, Laney said Poole has expressed a desire to retire, but will be staying on through the end of this year.
Laney also established two new committees: the Economic Incentive and Contract Committee and the Grant Review and Capital Spending Committee.
The Economic Incentive and Contract Committee will be assigned to reviewing contracts associated with economic incentives for private ventures and report to the council members the findings of their review and value of the economic incentives to the private venture on a per job created basis as well as reporting on whether the venture is meetings the objectives presented to the council. The committee will also make recommendations on underdeveloped or under-utilized areas of the city with the focus being revitalization and job creation,” according to Laney.
The Grant Review and Capital Spending Committee will review and make recommendations to the council on grants. It will also review capital spending requests, prioritize, and report to the council their findings prior to the preparation of budgets for each year.
The council met again the same morning at 10 a.m. for a scheduled council meeting that was moved from Thursday, Nov. 3.
During that meeting, Airport Director Jason Pendergrass asked the council to allow him to move forward with a pre-application for an ALDOT grant to be used for expanding and remodeling the terminal building. The grant would be for $166,000. The city’s match for the grant would be $8,300.
Pendergrass said the project would double the size of the terminal.
The pre-application would not commit the city to the grant, but rather informs ALDOT of the city’s intentions to apply.
The council also approved to move forward with a state grant that will allow an access road to be constructed leading to the Two Rivers Lumber mill to open next year.
Another grant item came from Fire Chief Vernon Waters who asked permission to seek a $46,052 grant to purchase equipment for the department. The city’s match of the grant would be $2,193 and would have to pay the grant writer $2,089. The request was approved.
The council approved the measure.
Following a brief public hearing with no speaking in favor or against, the council approved to rezone two lots at 2933 Hwy. 80 East from Residential 1 to Agriculture 1.
After hearing an update on Christmas on the River from Demopolis Chamber Director Ashley Coplin, the council approved a motion allowing for the event to take place.
Back-to-school shoppers will no longer have to worry if the city will participate. The council approved an ordinance stating that as long as the state allows, the city will participate in the weekend event each first weekend of August.
Due to Christmas on the River events, the council voted to move the meeting scheduled for Thursday, Dec. 1, to Monday, Dec. 5. at 5:15 p.m.
The next meeting of the city council will be held on Thursday, Nov. 17, 5:15 p.m., at Rooster Hall.