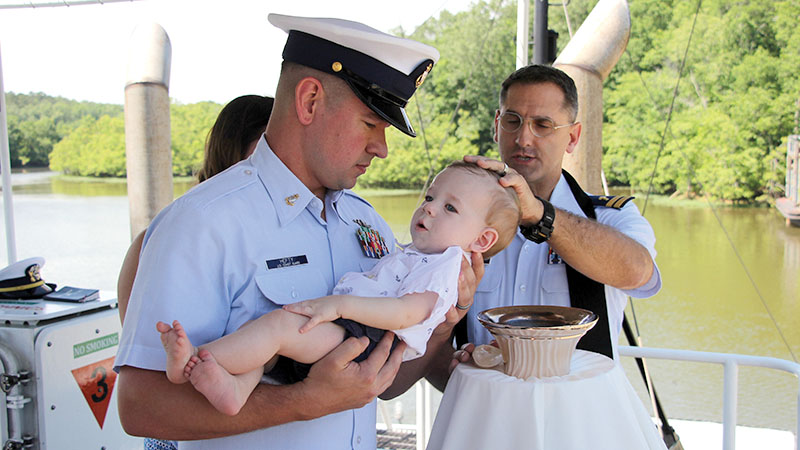 Less than three years ago, the U.S. Coast Guard Cutter Wedge stationed in Demopolis held its first on-board nautical baptism. On Wednesday, the younger brother of the boy baptized in 2014 was baptized from the same bell.

Brayden Hefty, who is 8-months-old, was baptized aboard the Cutter Wedge by Chaplain David Pahs from the USCG’s Sector Mobile. The traditional sea baptism was performed in front of Braydon’s family as well as members of the Cutter Wedge crew. 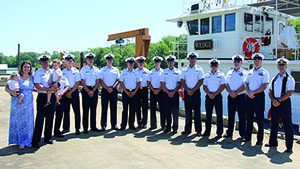 In October 2014, Brayden’s brother, Lucas, was baptized aboard the Cutter Wedge. Both boys are the children of Chief Petty Officer Michael Hefty and his wife Alisha Hefty. Also on board for the ceremony were Jim and Sharon Hefty who are the children’s grandparents.

While Michael and Alisha have been stationed in Demopolis, the family is originally from Charlotte, Michigan. The couple wanted to have the baptism aboard the Cutter prior to their transfer to Ohio later this month.

The baptism is a military tradition dating back to the British Royal Navy, according to Senior Chief Petty Officer Derek Spivey.

“If a child is born in a foreign country or aboard a ship, they can be baptized under the flag of that ship to give them citizenship of the country of that flag,” Spivey said. “It’s a great religious tradition, but also a great nautical tradition.”

To perform the baptism, the ship’s bell is turned upside down to hold water. Once the baptism takes place, the name of the individual is engraved on the inside of the bell. Lucas’s name was engraved following his 2014 baptism and now Brayden’s name will be added. 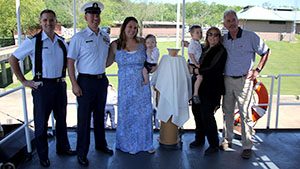 Those on hand for the baptism of Lucas Hefty aboard the Cutter Wedge Wednesday are, from left, Chaplain David Pahs, Michael and Alisha Hefty who is holding Braydon and Sharon Hefty, holding Lucas, and Jim Hefty.

“We wanted both to be baptized here from this bell and for their names to be together. To be part of this tradition is very special to our family,” Michael Hefty said.

Chief Petty Officer Spivey said these types of baptisms are conducted at the request of members of the Coast Guard. Crewmembers who attend and participate do so on a voluntary basis.

“This is a way for us to honor maritime traditions as well as the wishes of our crew. It’s a great thing to see and we’ll keep doing it as long as we’re able to. It’s also nice to have members of the crew here to support their crewmate and his family,” Spivey said.

The mission of the Wedge is to aid in navigation on the Tombigbee, Black Warrior, Tenn-Tom and Mobile Rivers as well as Locust Fork and Mulberry Fork. It was commissioned in 1964 and carries 16 men on board.