Canebrake Players take stage with ‘Smoke on the Mountain’ 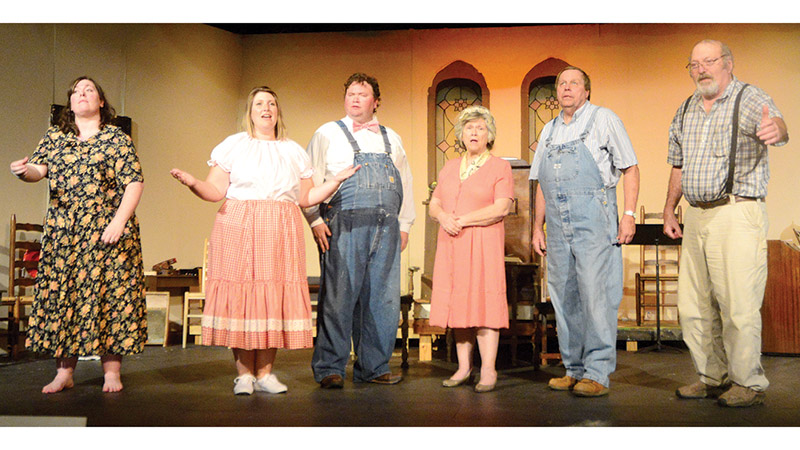 The Canebrake Players are back at it for their summer production, “Smoke on the Mountain” which will run from July 28-July 31 at 7:00 with the Sunday, July 30 performance starting at 2 p.m.

Laurie Willingham assumes the role as director for the musical comedy based on a book by Connie Ray.

“This is a fabulous show that the Canebrake Players have been talking about doing for many years, and we haven’t because typically in the summer we like to do a big cast musical,” said Willingham. “This show originally only has seven cast members, however I took a lot of liberties with this and I added a choir, band members and we brought a seven-member cast up to 23 (members). I have taken some liberties with it, but like they say ‘the more, the merrier.’”

According to Willingham, “Smoke on the Mountain” is about The Sanders Family, who were gospel singers and were off the circuit for many years, decides to come back. Meanwhile, Mount Pleasant Baptist Church is celebrating having electricity and one electrical light bulb. So, the church has invited the Sanders Family to come and sing with them.

Rev. Mervin Oglethorpe is the pastor of Mount Pleasant and he is trying to get the church to be progressive and move into the “modern” age of the time and he’s dealing with some drawbacks and resistance from some of the congregation, but the preacher perseveres to make it happen.

With so much going on, Willingham anticipates the audience will have a great time.

Even though musicals are a summer tradition for The Canebrake Players, the production still comes with some difficulties.

“Musicals are tough. They take a lot more work especially when you’re dealing with a live band instead of canned music, because timing is everything with this,” said Willingham. “It’s fun though. It is a lot of work, but it is fun work. The hardest thing is the long hours because after the cast goes home, then it’s my time to get stuff done on the stage and work on bringing that up. It all comes together. I fuss sometimes about people not learning their lines or music, but it always comes together. It’s a labor of love.”

When it is all said and done, Willingham hopes those in attendance understand what the actors on stage are trying to get across.

“I hope they will be most excited about the message, because as a Christian I think this is just a wonderful message and you’re going to see this family show how they rely on their faith and their love of the Lord to get them through life We all should do that,” said Willingham. “You’re also going to see this fabulous cast. They were great. I love every one of them. That’s my favorite part of working this. Not only are we portraying a family on the stage, but we become a family after the weeks we spend up here together. That’s what I love about this, the comradery and the family.”

Tickets for the show can be purchased at the door and are $12 for adults and $8 for students.

(This article originally appeared in the Saturday, July 22, print edition of the Demopolis Times.)