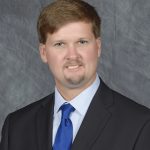 As the District Superintendent of the Year, Kallhoff is now one of nine finalists for the statewide award that will be announced on Tuesday, Oct. 10. The honor is awarded by the School Superintendents of Alabama.

“A successful leader is only as good as the people with which he surrounds himself,” Kallhoff said. “I am blessed to work with great people here in Demopolis. It begins with the community, stakeholders and board of education and from there it filters down to my staff, the principals and the employees at each of the four schools in Demopolis. It is an honor to represent the superintendents in District 2, which stretches from Butler County to Sumter County. There are several superintendents in this district who are known as veterans in Alabama and continuously make an impact on the students in the Black Belt region of this state. I am fortunate to be able to work with these educational leaders and learn from them each school year.”