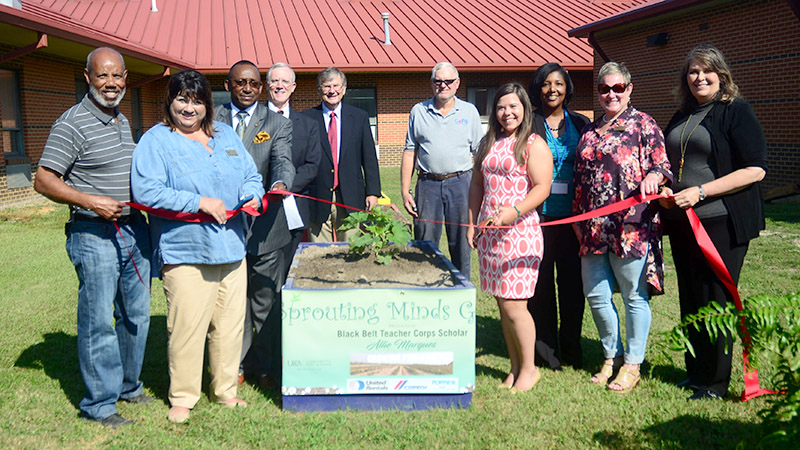 Westside Elementary School was the place to be Friday morning as two ribbon cutting ceremonies brought in state, local and University of West Alabama officials to celebrate the CEMEX/UWA Black Belt Teacher Corps “The Sprouting Minds” Project and the new Pre-K/OSR classroom.

When it came time to build the boxes where students on each of the Demopolis City Schools System’s campuses, Marques received help from CEMEX of Demopolis, Poppies and United Rentals to make the vision and plan into a reality.

Marques, a Livingston native and Demopolis High School graduate, addressed the crowd to speak about how growing up on a farm helped instill a hard work ethic and how that experience made it important to her to spread an interest in agriculture to other students. 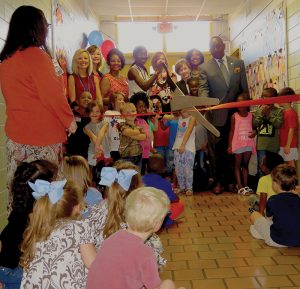 A new Pre-K/OSR classroom has been a welcomed addition to Westside and was celebrated with a ribbon cutting by the new teachers, Sen. Singleton, WES Principal Jackson as well as officials from the Alabama First Class Pre-K Program.

“I have two goals with this,” Marques said. “One is to increase our academic scores across Alabama, because we are a low scoring state and I do believe education is very important. The second is to increase interest in agriculture, because that’s a dwindling field as well. I mean you have to have food to survive and you have to have people to grow it.”

“She (Marques) actually did all the lesson plans for the teachers and they’re really excited about it,” said Jackson. “What we’re going to do is take those lesson plans and have the students plant different plants and vegetables, which will teach them work ethics and will teach them how people used to live off of these plants. I think they’re going to learn a lot from it like how to be responsible for their own project and actually just taking care of everything. I’m really about that.”

Also, the ribbon cutting portion of the program saw Secretary Jeana Ross, Department of Early Childhood Education, address the crowd regarding the new Pre-K classroom at the elementary school.

Westside now houses two Pre-K/OSR classrooms that are full of students and have a waiting list with even more students and parents wanting to be involved. There is room to add at least one more classroom on the Pre-K hall. Each class actually requires two rooms currently to give the students needed space — one for instruction and the another to serve as learning centers.

Jackson said the room was funded by a grant through the Office of School Readiness and has been able to identify a difference in students who participate in these types of programs and those who don’t. The grant providing funding for all equipment and materials needed for the centers.

“Initially, I wasn’t so convinced about learning though play, but now that I’m the administrator of Office of School Readiness (OSR) classroom I’m just so excited about it,” said Jackson. “These kids are actually learning through play.”

Since then the importance of the classrooms has become apparent.

“When we looked at their data in Kindergarten, those students who had the opportunity to be in a Pre-K class prior to going to Kindergarten, they were so academically ready and most importantly socially ready because they had the chance to mingle and socialize,” said Jackson. “Just the whole language and social development, it gives a lot to our students. It gives them a jump start on a lot of things.”

(This article originally published in the Saturday, Sept. 16, print edition of the Demopolis Times.)