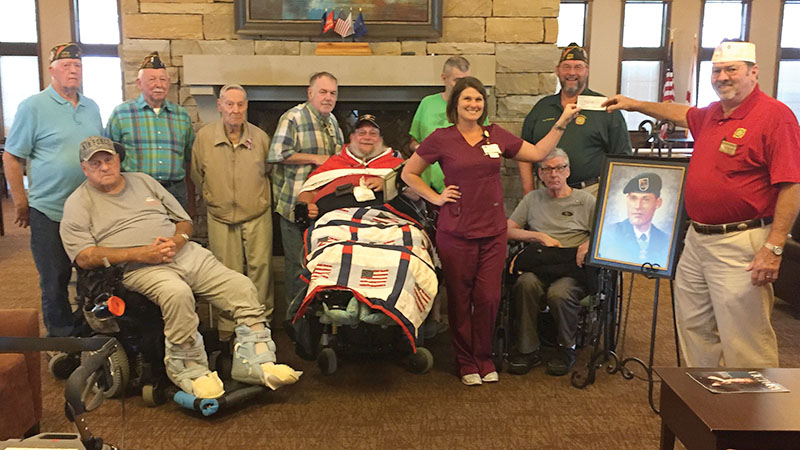 Veterans of Foreign Wars (VFW) Post 5377 visited the Colonel Robert L. Howard State Veterans Home in Pell City on Sept. 26 to spend time with the veterans living in the home and present the staff with a donation to the home.

Phillip Spence, Post Surgeon for VFW Post 5377, said he and the three other members who accompanied him were humbled to visit with the veterans at the home who “… sacrificed more than you and I can ever imagine”. They also spoke with staff at the home to see what needs of the veterans they could meet.

“I was humbled, but I was also inspired by the courage that I encountered from veterans who were tragically wounded, injured, disabled [and] by those who had grown old before their time but who still loved their nation and its people and would go back again tomorrow if their nation called them,” Spence said.

The donation will cover many personal comfort and hygiene items such as socks, toothpaste, toothbrushes and combs according to Spence.

The home was named after the Colonel Bob Howard, an Alabama-native who some historians believe was the most highly-decorated living soldier at the time of his death in 2009. Visitors are welcome at the home, even if they don’t have loved ones living there, as long as they call ahead.

(This article originally appeared in the Saturday, Oct. 7, print edition of the Demopolis Times.)