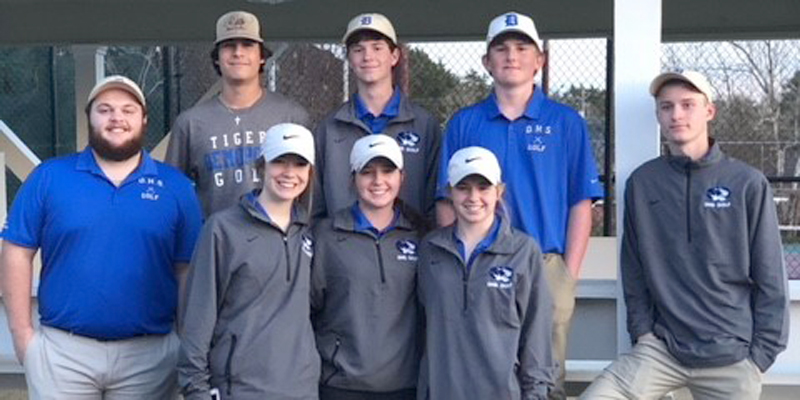 The Demopolis High School boys’ and girls’ golf teams are headed to the Sectionals Tournament on April 30 in Mobile. From there, individual and team scores will determine who will be advancing to the sub-state and state tournaments.

“This will be the first time in my five years of head coaching that I’ll be taking the boys’ team to sectionals,” Coach Greg Rhyne said.

Both teams are working hard to improve their game for Sectionals. Freshmen Cole Wilson and Zachary Allen are both focusing on their putting for the upcoming tournament. Sophomore Caroline Webb is working on her short game while senior Hannah Webb is practicing her shots around the greens and her fairway shots.

Members of the golf team have been helping each other improve all season, which helped pave the way to sectionals.

Despite the expected jitters that come with any major tournament, the players are ready and confident for Sectionals.

With it being H. Webb’s last season with the team, she looked back on her favorite memories of playing golf for the past three years, including making her first birdie at last year’s sub-state tournament. She leaves a special message to her teammates and coach.

“I want to tell all the players to continue working hard to keep improving. Also, I would tell the team to enjoy the seasons they have left because it flies by. I have enjoyed playing with everyone; it’s been a great year! I would also like to thank Mr. Rhyne for being a great coach and helping me improve so much.”

The mid-season report for the boys team is as follows:

The mid-season report for the girls team is as follows: