Demopolis City Schools Superintendent Kyle Kallhoff reported on the progress of various projects being done this summer at local schools during a meeting of the Demopolis Rotary Club.

Among the projects are those related to school safety. Kallhoff said the system secured federal funding to help provide access control doors at main entries to each of the system’s four schools. Teachers will enter using a key access pad while visitors will have to be “buzzed in.”

“After the incident in Parkland (Florida), we wanted to focus on these issues. It will change things for our parents visiting the school, but unfortunately, that is where we are today,” Kallhoff said. 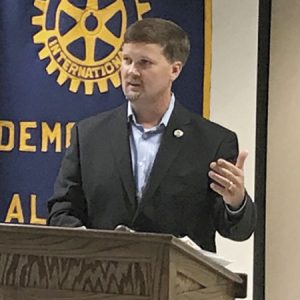 DCSS Superintendent Kyle Kallhoff provides an update on summer projects at a meeting of the Demopolis Rotary Club.

The initial costs for covering the main entries is $70,000, the superintended said additional doors could be added each year at a cost of $3,500.

The system is also working with the Demopolis Public Safety Department to add two additional school resource officers. The system increased its financial commitment from $40,000 to $80,000 to allow for the increase and having an SRO at each school on a daily basis.

“We have two mantras going into this school year — ‘Back to Basics’ and ‘Safety and Relationships.’ Our students and teachers must feel safe at school,” Kallhoff said.

The system is also working on projects related to compliancy with the Americans With Disabilities Act at the middle school. While project bids came in too high to get all the work done this summer, Kallhoff said a handicap accessible ramp is being constructed at the school along with several other items in the school’s interior, including bathrooms.

Many students will return to classes this fall with new learning tools as the system is replacing its smartboards with touchscreen television monitors. This technology initiative is an ongoing effort with this year’s focus being at Demopolis Middle School. Westside Elementary received the screens last summer.

Work is also underway on a STEAM lab, which is being constructed from an old and unused woodworking shop.

The lab will feature a variety of tools designed to educate and inspire students in the areas of Science, Technology, Engineering, and Mathematics.

“We will have a lab with 12 computers, using the same coding languages as local industries. There will be a virtual reality lab … for those students who don’t have the opportunity to travel, with these goggles they can go and learn about any place in the world. It will have circuit boards, a 3D printer, Legos, and an art studio,” Kallhoff said.

The 4K Program at Westside Elementary has grown to three classes. Even with the increase Kallhoff said there are 32 on the waiting list. Still, he said the increase in the number of 4-year-olds getting an early start in school would be beneficial.

The superintendent also spoke about the growth of the system’s HVAC program, which is offered through dual enrollment with Shelton State Community College.

“This has been a grass-roots effort and the maturation of the program has been amazing. We have two labs and 10 full units. We have two students already in the field working,” he said.

As for HVAC systems at the schools, two are being replaced this summer — one for the high school’s band room and another in the cafeteria.

In addition, he said the school system is now offering programs to help students move toward certifications in welding and daycare.

In the coming weeks, the system will be welcoming its new teachers.

“We will have some new faces and young teachers who are excited about what we do,” he said.

Kallhoff added that he intends to speak with other local officials about the future of the school system’s facilities. “In order to address our facilities, there will have to be additional revenue,” he said.

(This article originally appeared in the Wednesday, July 25 issue of the Demopolis Times.)