The Demopolis Tigers are sitting at 7-1 on the 2018 season, but more importantly they are 5-0 in region and one win away from securing the Class 5A Region 3 title.

Coming off a shutout victory over Jemison last week, 50-0, the Tigers will travel to Chilton County where they will win to be the top seed from the region. 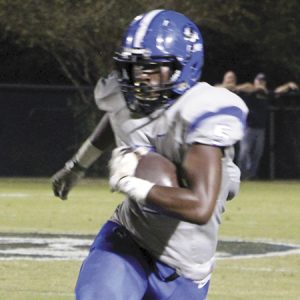 Senior wide receiver Keyjun Gracie has been a difference maker in the passing game for the Demopolis Tigers this season. He has 586 receiving yards on the season and has scored nine touchdowns.

Chilton County would also like to claim the region title, and while they are 4-4 overall, their region record is 4-1. The only other team in the hunt is Bibb County, which is also 4-1 in the region, but has already lost to Demopolis, 39-7, in a September contest. Bibb County defeated Chilton County last week by a score of 34-21.

Overall, Demopolis leads the series with Chilton County with an all-time record of 13-4. The two schools last met in 2011 when Demopolis squeaked out a 23-20 victory.

With two games left in the regular season, several players could hit milestones before the playoffs. Senior runningback A.J. Besteder needs 130 yards to hit the 1,000 mark. He currently has 870 yards and has scored nine touchdowns. Freshman runningback Brandon Franklin has 444 yards on the ground for the Tigers.

While the Demopolis passing game hasn’t always clicked, it has seen some big plays. Quarterback Peyton Stevenson, a sophomore, hit the 1,000 yard mark in passing last week and has thrown for 12 touchdowns. He has also scored four touchdowns on the ground.

On the receiving end, Keyjun Gracie has been a big hit for the Tigers. While a senior, he is playing his first year of football and has amassed 586 yards, averaging just over 20 yards per catch, scoring nine touchdowns, and leads the team in total points scored.

Another senior, Tyquan Alston is the second leading receiver with 334 yards on 28 catches.

On defense, senior Tavian Brown is having a great season, leading the team with 47 solo tackles, which is more than double the player in second place, which is Alexander Besteder with 22. Brown also leads the team with five tackles for loss and five sacks. Fred Haywood is second in sacks with 3.

Meanwhile, in the secondary, C.J. Williams, a junior, has been incredible, having already recorded seven interceptions.

(This article originally appeared in the Wednesday, October 24 issue of the Demopolis Times.)