The Demopolis City Council named Demopolis Police Department Captain Rex Flowers as the city’s new police chief. Flowers had been serving as the interim chief of the department since former Chief Tommie Reese’s departure in early January. Flowers has been with the DPD for nearly 25 years.

“I’m just overwhelmed by all the support I had throughout the process, and I’m ready to get to work,” Flowers said. 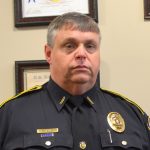 Reese, who worked with Flowers for many years in the DPD, said “I’m very proud of him because I know him, and his heart is all about law enforcement. He loves to serve people, and I think he’ll do a great job for the City of Demopolis.”

“I believe Chief Flowers will do an excellent job as police chief for the City of Demopolis,” he said.

He also thanked the other candidates and wished them the best in their future endeavors.

The council also granted a three percent sales tax rebate on infrastructure improvements up to $50,000 on a retail development project along Highway 80 that is expected to open by the end of the year. The project is a 10,000 square foot Dollar Tree.

Additionally, the council accepted Yamaha’s bid for the Parks & Recreation Department to lease 25 golf carts for three years at an annual rate of $663 per golf cart.

Other items discussed by the council include:

• Laney said he was “shocked and saddened” by the controversial editorial written and published by Goodloe Sutton in Feb. 14 edition of Linden’s Democrat-Reporter. Sutton’s editorial was featured in national headlines and was criticized by many Alabama politicians and leaders.

“I’m very saddened by the fact of the damage one person can do to the nation’s perspective of what we’re about,” he said.

• tabling the minutes of the previous city council meeting so City Clerk Sam Gross can go through the recording and verify a statement made by Councilman Charles Jones. The council also tabled discussions on a city golf cart ordinance so Councilman Bill Meador can contact communities who already have similar laws in place, two appointments to the Cemetery Board and an update on the statue in the downtown area.

• re-appointing Terry Windell to the Airport Commission Board as well as Dr. Judy Travis and Michael Patterson to the Tombigbee Healthcare Authority Board of Directors.

• approving a request allowing the fire department to move forward with applying for various grants.

• approving mayor travel to Warrior Tombigbee Waterway in Point Clear, Alabama from May 20-22.

• Barbara Blevins, public works superintendent, also notified the council that the tennis courts by the Demopolis Civic Center will be removed and replaced with a grass area. The approximate cost will be equal to fuel and labor.

• Councilman Charles Jones announced that the Water Board wants to remove the water tower near the tennis courts, which will cost approximately $63,000, as it is a safety and liability hazard. Laney requested that contact be made with the Marengo County Historical Society and the Historic Preservation Society.

(This article originally appeared in the Wednesday, February 27 issue of the Demopolis Times.)