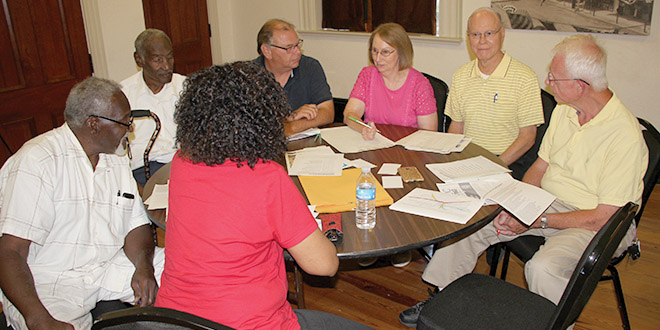 A group discusses possible ideas for a citywide strategic plan during a community meeting held June 13.

The first in a series of public meetings that organizers hope will lead to a long-term strategic plan for the city was held Thursday, June 13, at Rooster Hall.

The meeting was organized by Goodwyn, Mills and Caywood Engineering and Architecture, which is working with city officials to develop the comprehensive strategic plan, being called Demopolis In Action. Bryan King, a community planner with Goodwyn, Mills and Caywood, led the meeting and shared statistics he gathered for a Community Analysis Draft as part of the project’s first phase. With the meeting Thursday, he said phase two begins, which involves engaging the public.

King highlighted for those in attendance some of the statistics he gathered for the community analysis, such as population and demographic trends, employment and workforce, income data, education opportunities, and recreation availability. LINK TO COMMUNITY ANALYSIS DRAFT

Gaining public feedback is important, King said, as it will dictate the overall course of the plan and its future success.

“These plans have to be done by the community,” he said. “We are simply the facilitators; it must belong to the community.”

Residents attending the meeting discussed some of the city’s needs, strengths, and challenges. Job opportunities, expanding the business base, and providing a higher quality-of-life were among many items discussed.

The goal of the second phase is to get as much feedback as possible from the community, King said. From there, work will enter the third phase, which involved developing goals and plan, as well as the implementation strategy.  The fourth, and final, stage is adopting the plan and “beginning work.”

“We need to know from the community what is important to them and the direction they want the city to go so that we can develop a plan to get there,” King said.

The next community meeting will be held in August, although a date has not been set. A digital version of the Community Analysis Draft will be available with this story at demopolistimes.com.