“To God be the Glory for everything He is doing in my life,” Dr. Wells said after being named as the first Black Alabama Young Optometrist of the year by the Alabama Optometric Association. 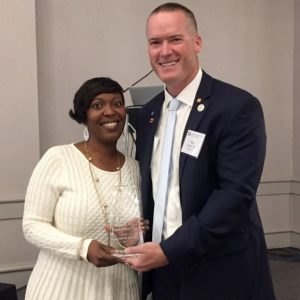 Dr. Wells was bestowed the honor because of her numerous community affiliations, outstanding service to the profession of optometry by serving as a legislative key person and team lead. In this leadership role, Wells serves as a liaison between several legislators and the Alabama Optometric Association to ensure that all legislation is compliant with the needs of all patients.

In addition to her optometry honors, Wells was named as one of Birmingham’s Top Influencers under 40 together with, Birmingham’s current mayor. Wells was honored for her service to the Birmingham youth by serving as keynote speaker for annual school career days, judging annual school science fairs, and organizing several hands- on optometry workshops that expose girls to science, technology, engineering, and math.

Additionally, Wells was named as the Minority Business Award’s Medical Professional of the Year for her outstanding patient care and community service. She also provides service to the community by providing annual vision screenings at local church and community health fairs and nursing homes.

Wells, valedictorian of her 2000 Amelia L. Johnson High School in Thomaston is a 2004 graduate of the University of Alabama. She received her doctorate in optometry in 2009.  Her success is testament that hard work and dedication yields success even for young people who are reared and educated in rural communities.

She is a Christian woman of faith and grew up in the Lovely Baptist Church and the Christian Chapel Baptist Church.  Presently she is an active member of Pleasant Grove Baptist where her father-in-law, Rev. Dr. Willie Wells Jr., serves as pastor.

She is the daughter of the late Roland Robertson and Annie D. B. Robertson of Gallion. She is married to Willie Wells III, a graphic arts designer and owner of ESCAPE GFX.

Committed to community service, Dr. Wells is the daughter, daughter-in-law, sister, niece, cousin, and now most recently aunt of a family blessed with dynamic Delta Sigma Theta Women. She gives her time to several boards and in her spare time trains and runs marathons.

Wells is accepting new patients at her newly renovated office, Morris Avenue EyeCare, which is located on the historic cobblestone street at 2229 Morris Avenue, downtown Birmingham.