Thurman has had a long varsity career for the Patriots, beginning as a starter in the eighth grade. 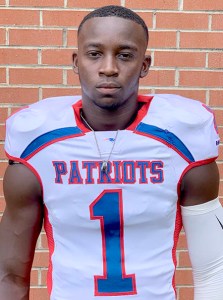 He had multiple offers to play college football, but he said Army, where he signed as a safety, is the right fit for him.

“This is going to give me the opportunity to play big time football and get a great education that will allow me to provide for my family longterm,” Thurman said.

He said the coaches who handled his recruitment also played into his decision to move forward with a verbal committment.

“I spoke to a coach almost every day for two weeks and I really felt like they cared about me and my future,” Thurman said.

He said he is preparing for the next level and playing football at West Point, which is located in New York.

“It is a long way from home, but I think it is a sacrifice worth making for my future,” he said.

“He’s a great student and player who has worked very hard. I’ve been coaching him ever since the eighth grade and he has a lot to offer a college team, not just with his athleticism, but even more so with his attitude adn work ethic,” Lockett said.

Thurman will be playing strong safety for the Patriot defense this season and will get some time running the ball out of the backfield on offense.

With his verbal committment done, Thurman said he looks forward to taking care of business on the field for the Patriots during the upcoming season.

“I look forward to being a senior and my top goal is helping put our team into position to play for a championship,” he said.

Timothy is the son of Dr. Timothy Thurman and Shawn Thurman.