The Demopolis Tigers finished off their regular season, and Senior Night, on a positive note with a big 55-0 victory over the visiting Greenville Tigers. The DHS Tigers took advantage of their opponent’s turnovers throughout the game and quickly racked up the points.

The Greenville Tigers gave the Demopolis players and the home crowd a scare when Ronald Davis returned the opening kickoff all the way down to the DHS 25 with only a few seconds gone off the first quarter clock, setting up Greenville with excellent field position.

However, the Demopolis defense did not let that rattle them, and they settled in to keep the visiting Tigers out of the end zone. At the 10:21 mark, Greenville’s quarterback Andrew Beck threw what was expected to be a touchdown catch, only to have it tipped by Demopolis’ Thomas Bedsole and intercepted by Ja’Marion Bennet.

The Demopolis Tigers took over at their own 24-yard line and quickly moved down the field where Javien Blanks would score the first touchdown of the night. Jose Tellez’s PAT kick was good, putting the Demopolis Tigers up by 7-0 with 7:25 remaining in the first quarter.

Greenville made another big run down to the DHS 20 with 6:25 still on clock, but the DHS defense held strong and forced Greenville to attempt a field goal. The attempt failed, leaving the score at 7-0 with 2:59 left in the first quarter. DHS got the ball back at their own 20-yard line.

Once again, the Demopolis Tigers wasted no time in moving the ball down the field to the end zone. Kentrell Adams scored the second touchdown of the night with 1:02 left in the first quarter. Tellez’s extra point kick was good, upping the DHS score to 14-0.

Greenville’s next possession ended with another interception by Ja’Marion Bennet who returned it for another touchdown with 3.3 remaining in the first quarter. Tellez’s PAT kick was no good, leaving the score as 20-0 at the end of the first quarter.

Midway through the second quarter, the Demopolis Tigers added to their score again when Kelvin Rowser scored with 6:54 left in the first half. The PAT attempt was good, increasing the Demopolis score to 27-0. 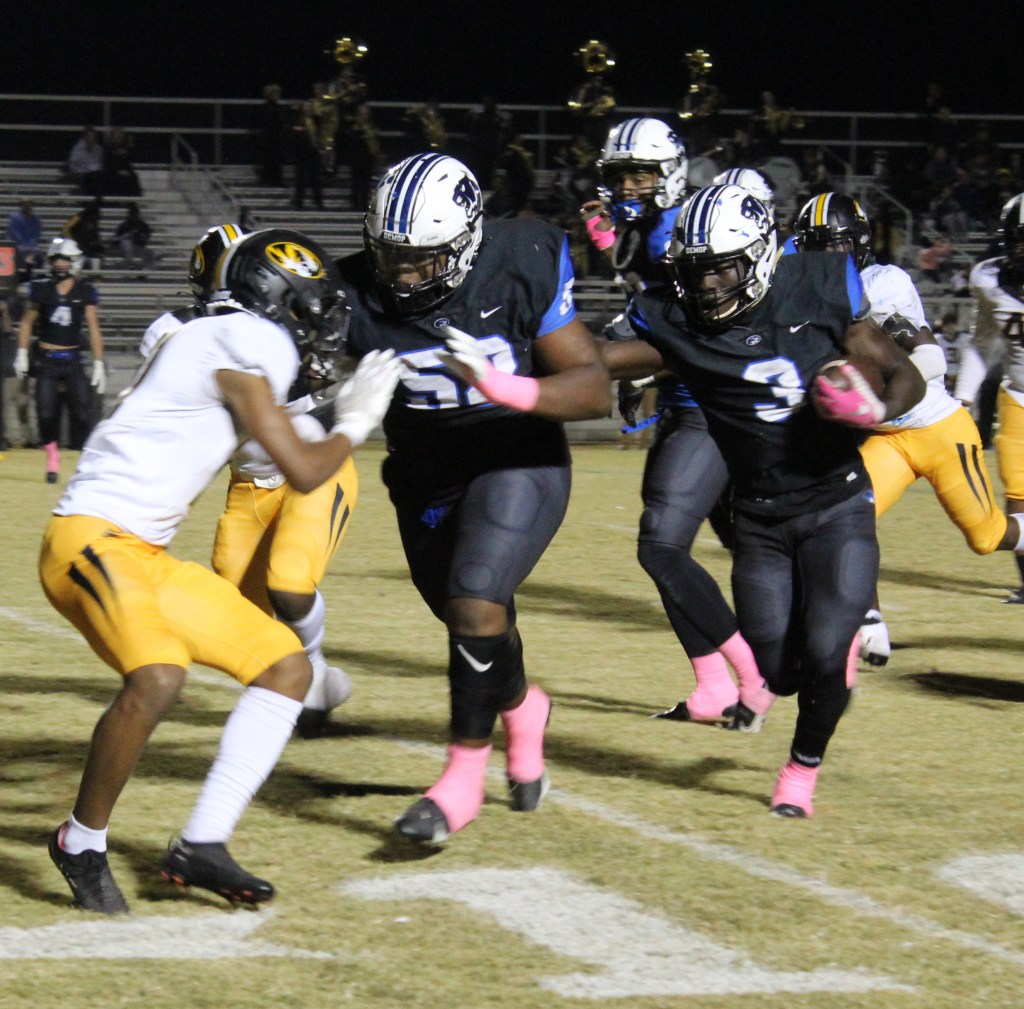 Kelvin Rowser (3) follows one of his blockers through the Greenville defense last Friday, October 21.

Greenville would throw another interception with 6:03 left in the second quarter, giving Demopolis the ball at their own 37-yard line. Rowser scored his second touchdown of the night with 4:03 left before halftime. Tellez’s extra point kick was good, putting the Demopolis Tigers up 34-0.

Greenville’s next possession went 4-and-out and they turned the ball over on downs.

Keishawn Rowser found the end zone next for Demopolis with 2:00 left in the first half. The extra point kick was good, making the score 41-0. Neither team would score again before time in the first half expired.

The second half of the game was sped up as the usual 12:00 minutes was cut down to 6:00. Dalyn Jackson took the opening kick back to the Greenville 10-yard line with 5:55 in the third quarter. Antonio Cox would take it in for Demopolis at the 4:25 mark. The PAT kick was good, putting the score at 48-0.

This Friday, October 28, the Tigers will have bye week before returning to host Elmore County in the first round of the 5A playoffs on Nov. 4.