Tom Boggs, Author at The Demopolis Times - Page 4 of 4

COLUMN: ‘All the Way’

I’m inspired to write this column for four reasons. We just had our annual reunion at the camp house of former Special Forces Colonels, who ... Read more

The Marengo County Sports Hall of Fame has announced the selection of Linden High School student-athlete Isaiah Scott as the recipient of the organization’s 2018 ... Read more

On Monday evening, Feb. 12, 2018 will usher in the 10th Class of Inductees to be enshrined into the Marengo County Sports Hall of Fame.  ... Read more 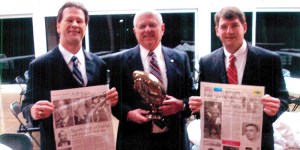 In the summer of 2007, Tom Boggs, Tony Speegle, and Johnny Brooker met to discuss how to recognize and publicize the tremendous sports history of ... Read more

Marengo County Hall of Fame banquet to be ‘spectacle’

There have been more than just a few folks who have made the statement that if they had known how much fun was had at ... Read more

Little bitty changes we lived for a while

Well, yep, I reckon I've spent most of my time penning words and sentences 'bout the 40s and the 50s, but I was still around ... Read more

I was breaking up a deer field for my grandsons the other day, and as I was bumping along, on my John Deere pulling that ... Read more

The capitol of cow country

Now, before you read on this week, stop and gander at that photograph…now take a guess who that it with the ribbon for showing that ... Read more

The remembering of a public servant

With a caption like the one above in one of these columns, you’d expect I’d be taking about somebody I’ve known who’s passed on away ... Read more

I reckon this is the first column I’ve ever produced with just one word as the title, but I believe that is enough for what ... Read more

A gathering of Devils from the 50s

Sixty-one years ago used to seem like a mighty long while…a mighty long one, but daggum if that was just a hop, skip and a ... Read more

The picture today is a little scraggly, but it’s mor’n 60 years old. That’s Ol’ Thomas with my first deer, and my nine-year-old brother looking ... Read more

I’ll be a Red Devil ’til the day I die

I attended still another funeral in my hometown of Linden the other week, the funeral of a former all-state guard from the Linden Red Devils, ... Read more