11U takes second at state 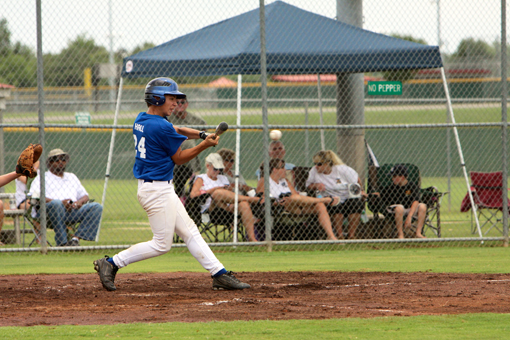 The Demopolis 11U Cal Ripken all-star team put together a strong showing last weekend in Childersburg, pushing all the way to the championship game before succumbing to Attalla 11-4.

The squad opened the tournament Saturday morning with a 10-6 loss to eventual state champion Attalla. From there, Demopolis rebounded to blast Covington County 12-1 Saturday evening.

Demopolis then dropped host Childersburg 5-4 Sunday after having trailed 4-3 in the bottom of the sixth inning.

Monday morning saw a quick turnaround with Demopolis taking the No. 2 seed in the single-elimination round. The first test for head coach Dereck Morrison’s squad was to get by the same Childersburg team it narrowly escaped just hours earlier.

Demopolis took a 12-4 lead at one point before a pair of home runs got Childersburg back into the contest.

Demopolis eventually proved strong enough to hold off the comeback effort as it moved on to a 12-9 win.

That set up Monday afternoon’s title game against Attalla. In that contest, Demopolis carried a 2-1 lead into the bottom of the fourth before Attalla eventually broke through.

Despite the struggles in the championship game, the Demopolis pitching staff held up impressively throughout the tournament.

That accomplishment was remarkable given that many of the hurlers on the 11U team pitched sparingly during the local league season due to the presence of 12-year-old players in the age division.

“Our pitching overall, generally was pretty good,” Morrison said. “Nick Nelson pitched in just about every game. Hunter Colyar worked as the closer. Kyle Woodruff threw the ball very well and Ryan Morrison threw well. Our pitching was the best I’ve seen in a state tournament since I’ve known these kids in this age group.”

Morrison would have liked for his squad to gain a berth in the Southeast Regional, but said he was pleased with the way the group performed throughout the tournament.

“I thought we had a team capable of making it to the championship game,” Morrison said. “Every player made a contribution somewhere in the tournament.”