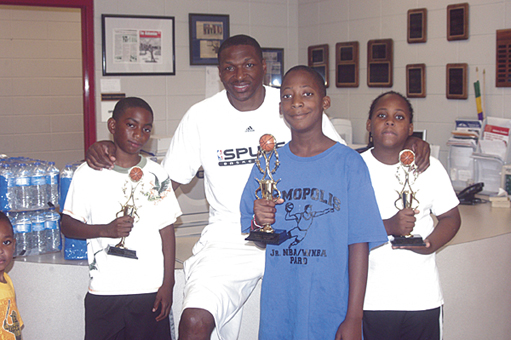 Demopolis native Theo Ratliff has a new home after signing with the two-time reigning NBA champion Los Angeles Laker Thursday. The deal is reportedly for the veterans’ minimum of $1.35 million according to a league source.

Ratliff, 37, played in a total of 49 games last season with the San Antonio Spurs and the Charlotte Bobcats. Ratliff initially joined the Spurs last summer and had high hopes. But the arrivals of Antonio McDyess and the emergence of second round pick Dejuan Blair nudged the veteran out of the rotation. He was quietly swapped to the Charlotte Bobcats for a future second round pick at the trade deadline. Reunited with head coach Larry Brown in Charlotte, Ratliff proved his wares again, averaging 5.1 points, 4.2 rebounds and 1.54 blocked shots per contest while helping the NBA’s youngest franchise to its first playoff berth.

“I’ve had a long and very rewarding career, and joining a storied and legendary franchise such as the Lakers adds an even more special element,” Ratliff said in a statement released by the team. “I look forward to playing for Coach Jackson and with great players such as Kobe [Bryant], Derek [Fisher], Pau [Gasol], Lamar [Odom] Ron Artest, Andrew Bynum and all my other new teammates, and hopefully to helping the Lakers win a third straight championship.”

A 15-year veteran of the NBA, Ratliff has averaged 7.3 points, 5.7 rebounds, 2.45 blocks and 25.5 minutes in his career with the Pistons, 76ers, Hawks, Trail Blazers, Timberwolves, Spurs and Bobcats. He played a key role in the 2001 Philadelphia 76ers run to the NBA Finals, a season in which he made his lone all-star team. Just days after that appearance, Ratliff was traded to Atlanta for a package that landed Dikembe Mutombo in Philadelphia.

With the Lakers now his ninth franchise, Ratliff will provide relief to big men Gasol and Bynum where his shot-blocking ability will be utilized off the bench and he should prove an upgrade over the likes of other L.A. front court reserves D.J. Mbenga and Josh Powell. He ranks 18th in NBA history with 1,963 blocks and led the league three times. Ratliff is also fifth in blocks among active players.

“Theo has long been considered to be one of the best defensive big men in the league,” Lakers general manager Mitch Kupchak said. “He is a consummate professional and a welcome addition to our team. Together with Bynum, Gasol, Odom and Artest, he gives us a formidable and deep front line.”

Information from NBA.com and ESPN.com was used in this report.