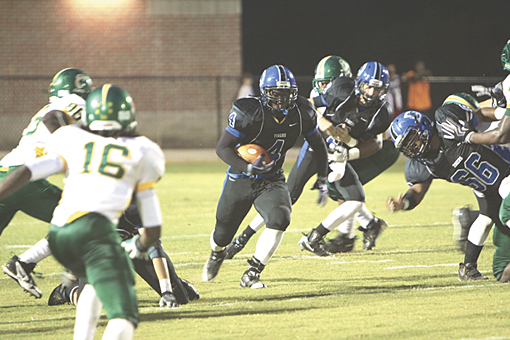 After the buzz his record-breaking performance in the Class 5A state title game generated, the summer of 2010 was expected to be a busy one for Demopolis High running back DaMarcus James. The senior-to-be’s spring saw him take a number of campus visits while also landing at the spring games for powerhouse programs like Alabama.

Since then, however, things have gone a little more quietly on the recruiting front for the young man who finished second in the 2009 Mr. Football voting.

“It’s kind of crazy,” James said. “One minute (college coaches will) be all over you and the next minute they act like they don’t know about you.”

James has taken visits to a number of schools, including Alabama, Auburn and Vanderbilt. However, teams from college football’s most prominent conference have yet to pull the trigger on an offer, often citing James’ speed as a deterrent.

“He’s a football player. He’s not a track athlete,” Demopolis head coach Tom Causey said. “He is as fast as he needs to be between those lines. He knows how to get the job done.”

James’ lack of attention from prominent NCAA Division I schools is just the latest indicator of the changing landscape of college football recruiting, a process that now values 40-yard dash times and bench press repetitions at least as much as on-field productivity.

“I don’t see too many of these track athletes put on pads and play football,” Causey said. “(James) can play anywhere he wants to play .He is a football player. He can play SEC, GSC. He can play in the SWAC, in the Ohio Valley, in the Sun Belt. He can play anywhere. I don’t know about (James being) a combine guy, but he can make the moves quick enough on the field.”

So far, a handful of schools have done just that. But, to date, James’ only Division I offers are from Troy, UAB and Washington State. More are expected to come with schools like Vanderbilt, Duke and BYU having shown some level of interest in acquiring his services.

“I’m still kind of waiting,” James said. “I need a family atmosphere. I want to have a personal relationship with the coaches. I don’t want it to be just a football thing.”

Family is an important thing for James, a young man who works two jobs in addition to shouldering his academic and football responsibilities.

“You’re growing up faster than some others,” James said. “It shows you how to handle responsibility.”

Causey has seen James’ maturity and sense of responsibility during the three years he has spent in Demopolis.

“He’s always been that guy that sits back and listens instead of jumping in and running his mouth,” Causey said. “Somewhere along the way somebody has taught him the benefits of being a hard-working, polite, humble young man.”

That work ethic, the same one that has carried him to on-field success, has also shown though in the academic venue for James. Not yet a senior, James has already put himself in position to qualify for college, boasting a solid GPA and far exceeding the minimum ACT score necessary for collegiate enrollment.

“You can’t really judge a book by its cover,” James said. “Some people think that because you’re really good, you’re not very smart in school. But I’m not going to let football interfere with my school work.”

“He does what he has to do to set himself up for his future,” Causey added. “He understands how important education is. He knows without education his goals and dreams cannot be accomplished.”

In short term, those goals include getting his teammates more involved as he tries to help Demopolis to a second straight Class 5A state championship. But long term James hopes to play college football. Right now, he has no idea where exactly that dream will lead him.

“He’s handling it all really well,” Causey said. “He knows he’s got offers from D-I schools out there. He’s going to go and do the best he can for his team his senior year.”