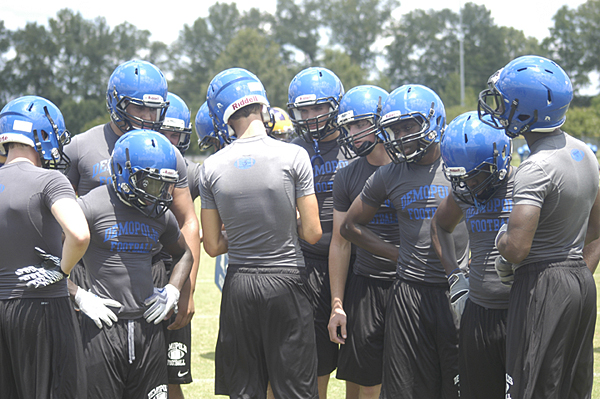 Tuesday’s scrimmage between Demopolis and Sweet Water saw a lot of unfamiliar faces get first team reps for the Tigers.

That may be theme for the team in 2010 as it looks to battle the attrition that has plagued it over the course of the offseason.

The biggest changes may have been on the defensive side of the ball where new defensive coordinator Matt Geohagen got his first look at the personnel lined up against another offensive unit. The 3-4 base lineup of Demopolis featured a number of upperclassmen vying for first team honors. Reid Barkley played the defensive end position for much of the first team reps, standing as one of only two returning faces in the Demopolis front seven. He shared field time with Neilson Renner, Chris Chaney, Delanee Reid and Kyle Littles among others.

The linebacking corps is relying heavily on production from Tramaine Irby, who became the only remaining player starter after Rusty Palmer relocated to Arkansas with his family a few weeks ago.

Offensively, the Tigers still have the familiarity of the Ben Pettus-DaMarcus James backfield combination. From there, the backs and receivers consist of a bevy of first-time contributors. Headlining that group Tuesday was senior-to-be Wiley Isaac, who displayed continuity with Pettus as well as flashing an ability to catch the ball in coverage. Additionally, Logan Holley made a handful of plays Tuesday at both safety and receiver.

The Tigers left the session with a better idea of their direction but still plenty of questions they will attempt to answer as they put on pads for the first time late next week.