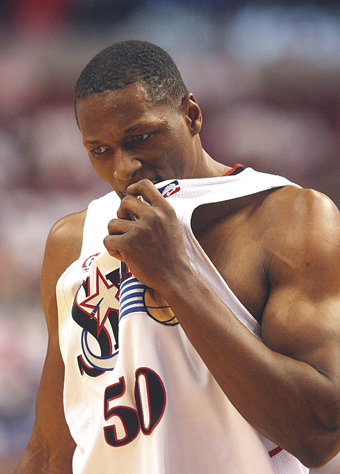 What do you consider the greatest accomplishment of your career?

I think my greatest accomplishment is me still being able to play after suffering through so many injuries that have ended a lot of people’s careers.

How has the NBA changed over the course of your career?

I think the NBA has changed in the age of the players. the nba is so much younger than when I came into the league.When I came in the veterans of the league were over 32 with 12-16 years in. Now the veterans are 25-27; Lebron James, Dwayne Wade Amare Stoudemire, etc. The majority of these guys either haven’t gone to college or went one or two years then came to the NBA.

Has there ever been anyone in your career that you were just thrilled to be on the floor with?

Micheal Jordan, the greatest to ever lace up sneakers.

Who is the toughest guy you have ever guarded?

Over the years you have garnered a reputation of being very charitable. What motivates your contributions?

I grew up in the church all my life, where I learned about all the charity and sacrifice Jesus made for us. My mother always taught to give blessing to other people even if it is something as simple as a smile.

You wanted Demopolis’ Ratliff Center to be more than just a basketball court. What has your vision for the facility been and why?

I wanted a facility where not only it would benefit the children of the neighborhood but the adults as well.I envision the center as an environment where people would be excited about coming. I envision a center with an educational and fun theme.

You have played all over the country. What is your favorite NBA city and why?

My favorite NBA city is Philadelphia. The fans in Philly are like no other. They understand the game and what makes a winning franchise.

The love and respect they have shown me throughout my career has been like I was the hometown hero.

You are regarded as one of the best shot blockers to play the game. Do you take pride in that? What is it about defense that you enjoy so much?

Yes. Shot blocking and defense have been something I have taken pride in since I was in junior high school. Coach (Luke) Hallmark has the highlight footage to prove it. I enjoy shutting my opponent down and seeing the frustration on their face when they can’t get a shot off. There is nothing like my opponent thinking he has an easy layup and I change their whole world with a blocked shot to send my team down for an easy layup.

Who has had the greatest influence on your life?

My Mother has had the greatest influence on my life. Managing a single parent home with two brothers is a tall task for a single woman. Yet she managed to get us to focus on education and be involved in many school activities. Her main goal in life was to raise responsible young men.

When did the NBA become a realistic goal for you and what would you say to young athletes chasing their dreams?

How do I know? Because that NBA player is me!