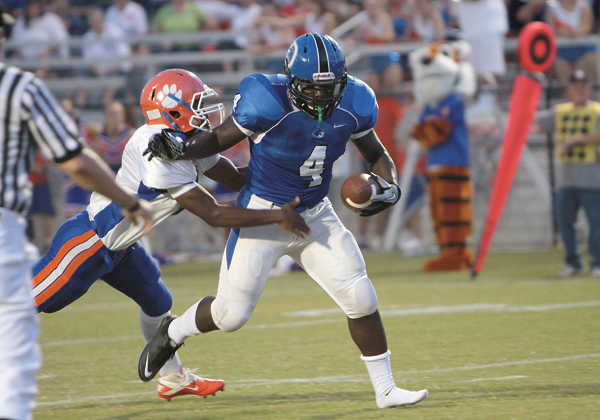 DaMarcus James only needs one shoe to run through the Chilton County defense en route to a score.

Demopolis scored on its second possession of the first quarter, parlaying a 42-yard punt return by senior Kiandre Adams into a five-play, 57-yard drive that ended when DaMarcus James ran 26 yards for a score without his left shoe. Senior Cameron Fendley added the extra point to put Demopolis up 7-0.

Chilton County answered right back, marching 65 yards on 13 plays before Zach Headley kicked a 41-yard field goal to cut the lead to 7-3.

DHS nursed that lead until 41.5 seconds remaining in the first half when Ben Pettus connected with a streaking Jerry Campbell in the back of the end zone for a 14-yard touchdown pass. Fendley’s point after was true for a 14-3 lead.

Just seconds later Adams picked off a first down pass to set the Tigers up 33 yards away with only 27 seconds remaining in the half. Demopolis failed to capitalize, carrying the 11-point advantage into the break.

Adams got his team started off right in the second half, returning the opening kick 80 yards for a touchdown. The Fendley kick made it 21-3 in Demopolis’ favor.

“If Kiandre will work like that every game, he can be a great, great player,” Causey said of the senior defensive back who ended the night with seven total tackles, an interception, a kickoff return touchdown and more than 150 total return yards.

Demopolis stretched its lead with 5:53 to go in the third quarter when James capped a 50-yard drive with a one-yard touchdown run. Fendley’s PAT made put DHS ahead 28-3.

Demopolis appeared poised to score again when Pettus found Darius Stewart for a 29-yard pass that got the Tigers down to the 18 yard line. A holding penalty and an Anthony Atchison interception stalled that drive, giving CCHS new life at its own 20. The visiting Tigers’ best effort on the ensuing series fell short when Adams deflected a deep ball out of bounds. Three plays later a Spence Overstreet sack pushed Chilton back 13 yards to the DHS 45. Chilton eventually turned the ball over own downs at the Demopolis 37.

Demopolis methodically marched down the field, getting 45 yards on five James carries, culminating with a three-yard touchdown run. Fendley’s kick put the game at 35-7. James finished the night with 129 yards and three scores on just 16 carries.

Only 16 seconds later second team linebacker Tyrelle Barnett picked off a pass and returned it 25 yards for a score. Fendley made it a perfect 7-for-7 on PAT attempts on the season, pushing the lead to 42-3.

“Tyrelle Barnett has been a really, really nice surprise this fall,” Causey said. “He’s a first year player and he takes to coaching really well. He made a nice play on a slant route, got his hands on the ball and knew what to do with it. Credit the rest of the defense for getting out in front and blocking for him.”

Demopolis will return to action next week when it goes on the road to face region foe Central-Tuscaloosa.