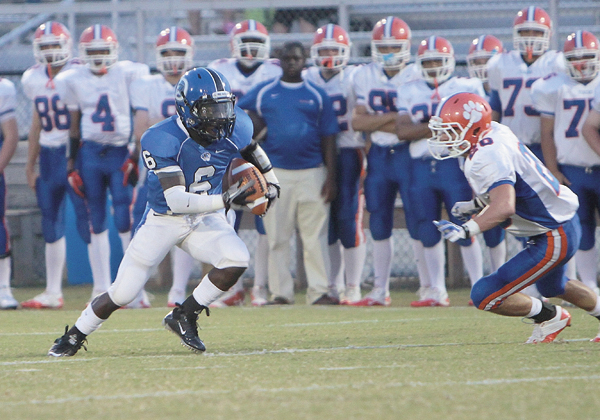 Demopolis High head coach Tom Causey takes few things for granted in life. And in football, he takes virtually nothing for granted. That is why he is quick to overlook the fact that Friday night’s opponent, Central-Tuscaloosa, has been outscored 99-13 over its first two games of the season.
Causey’s experience enables him to look right over the 0-2 record to the Falcons’ impressive athleticism.
“Really athletic team that is struggling right now to get it all together,” Causey said of what he has seen of the Falcons on film to this point. “But a really talented football team.”
Two of the athletes that have garnered much of Causey’s attention are the cornerstones of the Falcons’ aerial assault, senior wide receiver Keivondre Watford and freshman quarterback Vincent Davis.
“He’s huge. Big, fast and physical,” Causey said of the 6-3 Watford before turning his attention to the dual-threat freshman signal-caller he likens to a higher-profile passer. “I saw (Virginia Tech quarterback) Tyrod Taylor on TV (Monday) night and (Davis) reminds me a lot of him.”
Causey indicated the Falcons’ talent far surpasses its record, giving his team much reason for pause as it prepares for Friday’s region contest.
“I don’t think you can look at scores and tell what has happened with a team,” Causey said. “We try not to do a lot of scoreboard watching. We have to try to get better at what we do.”
While his team trounced its fellow Tigers with a 42-3 thrashing of Chilton County last week, Causey indicated there is much room for improvement for Demopolis as it moves forward.
“Hat placement and the angles that we’re taking on offense,” he said, pointing toward some of the Tigers’ struggles in sustaining blocks. “We’ve got to make sure we’re taking quick first steps. We’re not doing that right now.”
Demopolis has also continued to struggle with some fundamentals on defense as tackling problems have persisted.
“We’ve got to do a better job tackling,” Causey said. “We’re not getting our eyes up.”
One player who improved his tackling was senior Kiandre Adams, who led the team with seven stops in addition to an interception and a kickoff return for a touchdown.
“I thought Kiandre Adams played a really good football game,” Causey said. “If he’ll practice with that same intensity everyday, he can be a heck of a corner and return guy for us.”
The Tigers also got improved play from junior Spence Overstreet, who began contributing considerably in the linebacking corps last week.
“I thought Spence Overstreet played a good ball game and we’re expecting big things out of Spence,” Causey added.
All things considered, Causey recognizes his team is better now than it was two weeks ago.
“We were better against Chilton than we were against Briarwood,” Causey said before indicating that his team must get better against Central than it was against Chilton.
Demopolis travels to Central-Tuscaloosa Friday night.