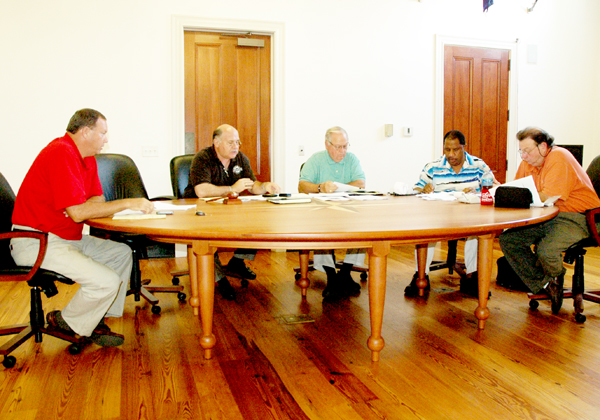 The Demopolis City Council met in a work session on Tuesday to discuss the 2010-11 city budget.
The main concern came from District 2 representative Mitchell Congress, who was concerned with the pay system matrix submitted by the Demopolis Police Department, pointing out an increase of $190,000 into the DPD budget for Fiscal Year 2011.
The matrix outlined a system for promotions within the department, including lieutenants and captains, which are not yet a part of the department. Congress was concerned that the money would be used to provide salaries for those positions during the fiscal year. DPD chief Tommie Reese told him that would not happen.
Congress also mentioned concerns of giving the police department personnel raises and not giving any raises to other city employees.
“The raises that are within the police department are adjustments for salary,” mayor Mike Grayson told Congress. “As far as the pay grade system, that will be implemented this year, and then, ultimately implemented over the next year with the fire department, and then the rest of the city. That was the finance committee’s rationale.”
“It is my understanding that three positions would be added to the police department: two lieutenants and a captain,” Congress said.
“That is not in this budget,” Grayson said.
Congress asked about the additional $190,000 in the police department budget.
“As of Oct. 1, animal control will be brought within the police department,” Grayson said. “Also, as we said, pay raises will be implemented. There will be three new officers on the force.”
Grayson later said that part of the increase would go towards those officers’ salaries and benefits.
Congress and District 3 representative Melvin Yelverton continued to ask for a way to provide all city employees with raises, but Grayson said the money is not there for that without reducing the number of employees.
The budget will be voted on at the next Demopolis City Council meeting on Thursday, Sept. 16, at 5:15 p.m. at Rooster Hall.