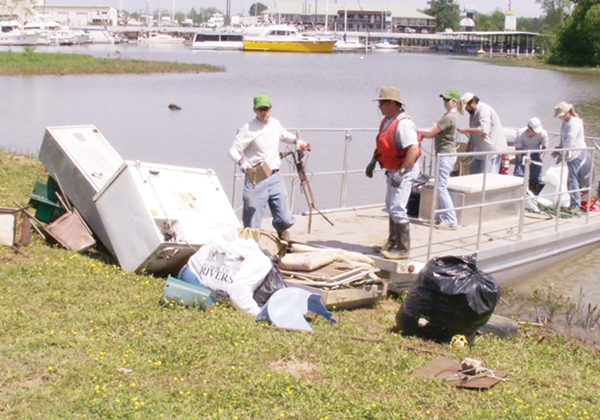 This photo from the 2007 clean-up shows the kind of trash that needs to be removed from our rivers.

The U.S. Army Corps of Engineers and Alabama Power Company are teaming up for their annual Rescue Our Rivers clean-up program next weekend. The companies will perform a clean-up of large-sized trash in and along the river on Friday, Sept. 17, and will welcome volunteers to assist with the smaller trash on Saturday, Sept. 18.
The volunteer session will last from 8 a.m. to noon at the Demopolis City Landing. Lunch will be provided, and volunteers will get T-shirts.
“This is going to be the sixth year that we’ve done this in Demopolis,” said park ranger Brandon Smith of the U.S. Army Corps of Engineers. “We’ve got Boy Scouts who come out on that Saturday, school groups and others, and we go out and pick up trash and clean up the river system.”
Smith said that they have found washing machines, driers and refrigerators along with other trash in and along the river.
Over the last five years of the program, some 273,228 pounds of trash has been collected from the river, more than 136 tons of trash. About 36 percent of that — some 98,362 pounds or 49 tons — has been recycled.
“It’s amazing to see how much we have changed it,” Smith said. “We’re getting less and less every year. The first few years, there was a lot of big stuff: grocery carts and hot water heaters. It’s gradually getting smaller and smaller.
“This year, we’re focusing on a lot of the older buoys and things that get dislodged and a lot of hand trash. Every time that river gets up, it takes the trash around the banks and moves it on. We’re trying to get some of that out.”
The trash that is collected is weighed and either sent to the dump or recycled.
Those wanting to volunteer to help clean up the river and its banks should come to the Demopolis City Landing on Saturday, Sept. 18, between 8 a.m. and noon.
“Almost everybody will get out in a boat,” Smith said. “We might just drive down closer to the river someplace.”