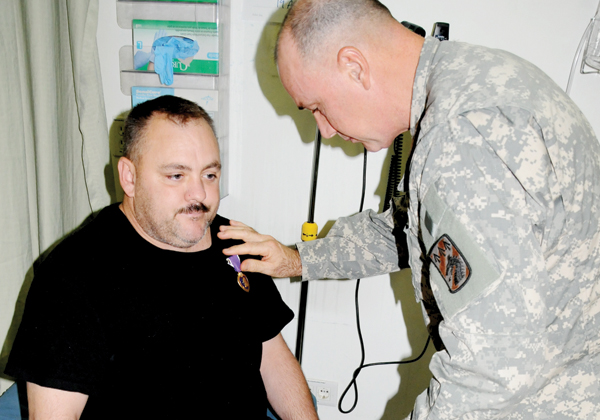 Two soldiers with the 2101st Transportation Company, 394th Combat Sustainment Support Battalion, 3rd Sustainment Brigade, 103rd Sustainment Command (Expeditionary) were awarded the Purple Heart on Aug. 23 after being wounded during an attack on their convoy.
Spec. George Evans of Wetumpka and Sgt. Earnest Colvin of Mobile each earned Purple Hearts after an attack on their truck during a routine mission in Iraq.
The attack occurred on Aug. 19, when a rocket-propelled grenade penetrated and exploded in the cab of their truck during a routine mission to Contingency Operating Base Speicher, Iraq.
“I was just worried about my sergeant,” said Evans, a driver with the 2101st Transportation Company. “I wanted to make sure he was safe.”
Evans exited the vehicle following the blast, helped Colvin, the truck commander, out of the truck and pressure-dressed his wounds until medical personnel could arrive on scene.
“It shows the true character of this soldier,” said Command Sgt. Maj. Stanley Richards, acting command sergeant major of the 3rd Sust. Bde., and a Phenix City native. “That’s what makes this Army so great. This isn’t just a job. We do what we do for the soldiers to our right and left, and unless you’ve been in uniform, you can’t really appreciate it. It makes me proud of him as a soldier in our great Army.”
The Purple Heart is America’s oldest award that is still given to members of the U.S. military.
“This is an award that you prefer not to give because of the cost often associated with it,” said Col. Shawn Morrissey, commander of the 3rd Sust. Bde., and a Boston, Mass., native, “but on a personal level, as a brigade commander and a soldier who has been doing this for 30 years, this is truly a humbling experience.”
Evans said that the award was a symbol of pride for him.
“It’s an honor,” he said. “I feel like I got some of my pride back.”
Colvin has also been approved to receive the Purple Heart medal and will receive his at a ceremony in the near future.