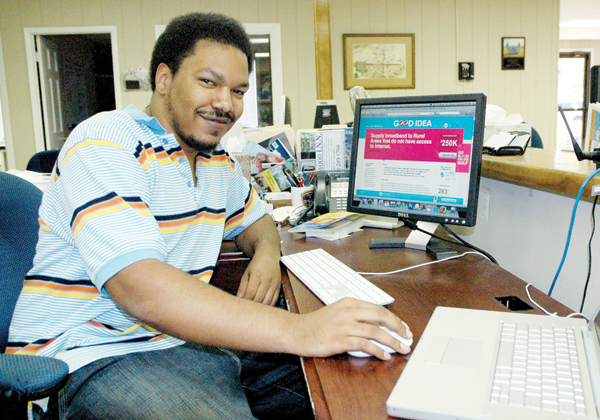 If awarded a grant from Pepsi, Devin Norman could bring Internet access to rural Alabama. -- David B. Snow | The Demopolis Times

A college graduate from Jefferson wants to provide Internet capabilities to the people who live in rural west Alabama and knows how to do it, but needs funding to make it happen. Pepsi has $250,000 to give away to people with good ideas, and will open its wallet to the most popular ideas.
Devin Norman hopes that his idea is voted one of the most popular so he can make his Internet idea possible, but he needs votes in the Pepsi Refresh Project from his friends and neighbors.
“I knew that I would need funding for this to work,” he said. “I tried to go through the government to get funds for it, but that didn’t work out too well because it was too late for that; I didn’t have enough time to get everything set up to do that.
“Late one night, I saw this commercial, ‘Pepsi Refresh: Refreshing America.’ They were giving out grants to people who were starting a business or doing something to help with the world. I said, ‘I think my idea would fall into that category.’”
Norman researched the project and saw all he had to do was submit his idea to the Pepsi Refresh Web site and get people to vote for his idea.
“My project is supplying Internet to rural areas, like Jefferson and other areas around that,” he said. “We need to build an infrastructure – towers and other devices to bring Internet here. Fiberoptics would be too expensive to run through this area, so I want to use AP units, service units and access points – like wireless routers. You could use this to pick up the Internet and send out the signal.
“Now, we need a T-1 cable. AT&T would supply the T-1 cable, but it is very expensive to run a T-1 cable to my area, but this grant would help provide that. It would cost about $700 a month just to keep this one T-1 cable going.”
Norman said the area would benefit from Internet access by bringing in new jobs, job search capabilities, new businesses and education by being able to take advantage of the opportunities that Internet provides.
“These people are missing out on all of that,” he said. “They don’t know that they can go on the Web and buy something and have it delivered to their house. They don’t know that they can go through school on the Internet. They don’t know that they can communicate with their families – there is so much that you can do now, and everything is jumping to that direction, and we’re being left behind down there.”
To get the money, Norman needs to get the votes online at www.refresheverything.com, and to get the votes, he needs to put the word out there about his project.
“Starting Sept. 1, I needed to get votes,” he said. “I’m trying to find the best way to get votes right now. I’m putting it on Facebook, word of mouth, I’m trying to go through the radio stations, get it in the newspaper. I’m just trying to promote it the best way I can because I already heard about people in Atlanta who have got radio stations, television commercials and so on.”
Norman graduated with a bachelor’s degree in digital media from Full Sail University. The job market is tough now, but his dream is to work in motion pictures or open a design company. A 2004 graduate of West Alabama Prep and a former student at Demopolis High School, Norman is ready to use his knowledge of the field to benefit his home area. He needs the votes of people with access to the Internet to help those in rural areas gain the same benefit.