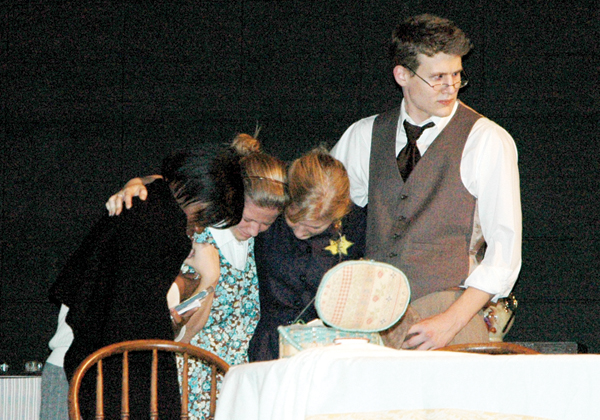 The “Princesses and Pirates” breakfast as well as other fundraisers sponsored by the Tiger Arts Guild will help support the arts in Demopolis City Schools and performances like “The Diary of Anne Frank,” performed last November. -- David B. Snow | The Demopolis Times

The Tiger Arts Guild will sponsor a fundraising breakfast called “Princesses and Pirates” on Saturday, Sept. 18, at the Demopolis High School cafeteria.
“The Tiger Arts Guild supports the performances that we do at the high school and any kind of arts event that we would have,” said DHS drama teacher Jody White. “We will have a performance at this breakfast. There will be Disney princesses who will be singing, and we will have a pirate and a princess at each table to host.
“The pirates will fight one another in a sword fight. They’ll fight over a princess. It will be like when you go to a Renaissance fair and all of the action is occurring while you are there.”
White said that the children who come to the breakfast are encourage to take part themselves.
“We want to encourage all of the children to come in costume, dressed like their favorite princess or a pirate. For the pirates, we’re going to have a treasure hunt, where we will dig for buried treasure, and the princesses will get a princess makeover.”
The meal will include three pancakes, sausage and a drink, all for $8. All proceeds will go to the Tiger Arts Guild to help fund the performances of “Godspell” and “Hairspray.”
The Tiger Arts Guild is a student organization that came about through the Alabama Black Belt Arts Initiative grant in 2006.
“This will be our fifth and final year,” White said. “Part of the requirement of the grant was that we develop our own fundraising organization to help sustain money to promote the arts in our schools.
“This year, we’re actually going to open up membership within our community, and we’ll have more information about that at the ‘Godspell’ performance, where people can contribute or join.”
“Godspell” will be performed in the DHS gymnasium on Oct. 14, 16 and 17. Performances will be at 7 p.m. on Oct. 14 and 16 and at 2 p.m. at Oct. 17.