Shoebox kickoff will have special guest 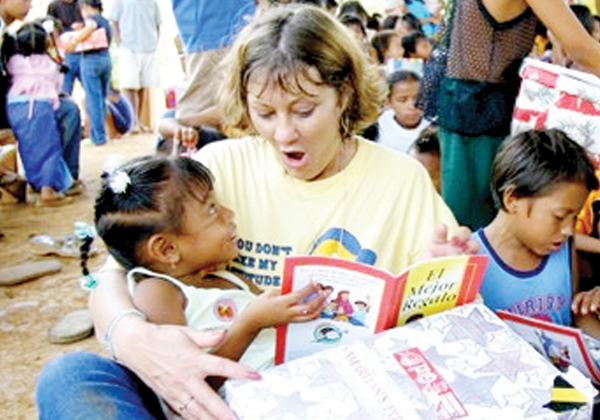 Mary Damron (at left), an international spokesperson for Operation Christmas Child, will be on hand at the local event’s kickoff on Oct. 5 at Fairhaven Church. She is reading “El Mejor Regalo” to a child in a Hispanic country, which translates to “The Greatest Gift.”

It’s almost time to kick off the annual Operation Christmas Child shoebox gifts project, the annual giving campaign where people can give a merry Christmas to children overseas.
Operation Christmas Child is an outreach program through Samaritan’s Purse that encourages people to fill a shoebox or a shoebox-sized box with toys for children overseas that are age-appropriate, ranging in age from 2 to 14. The shoeboxes are brought to shipping centers, including the Bethel Baptist Association building in Linden, during the week before Thanksgiving, where they are crated and sent to Atlanta, Ga. From there, the crates find their new owners in countries around the world.
The kickoff event will be held on Tuesday, Oct. 5, at 7 p.m. at the Christian Life Center of Fairhaven Baptist Church in Demopolis. The event is sponsored locally by the Bethel Baptist Association.
“Anybody who is interested in the shoebox ministry is welcome to come,” said Marcella Spence, who is coordinating the event at Fairhaven Baptist Church. “We will have refreshments, and we will also have someone from Atlanta on hand to talk about the project. We’ll have information about the shoebox project that people can pick up, to help them understand what it’s all about.
“It’s a mission. It touches children’s hearts, but it also has the potential of reaching many people for Christ. That’s the reason I’m in it. Those children get those boxes, and they get information in their own language in the box about who Jesus is. They take it home, and their parents read it, and many of their neighbors read it, and they come to know the Lord because of that.”
The special guest at the event will be Mary Damron, known as “Mama Gump,” who helped start the shoebox gift campaign years ago. A native of Ike’s Fork, W.Va., Damron heeded the call from Samaritan’s Purse president Franklin Graham, the son of noted evangelist Billy Graham, to pack collect shoeboxes filled with toys for children overseas.
“I’ve been involved with Operation Christmas Child for 17 years,” Damron said. “I got started when the war was going on in Bosnia, in 1994, and I had been praying for the children in Bosnia and for the war. I prayed for about four months, and then I caught a five-minute segment of Franklin Graham, where he had gathered a few boxes from his staff and taken them to orphanages in Bosnia and Croatia.
“I just started gathering a few boxes from my neighbors. I had 13 days, and we lived in the heart of the Appalachian Mountains — people are very poor there; they live way below the poverty line. My area brought to my house 1,258 shoeboxes in 13 days.”
Damron borrowed a truck and brought the shoeboxes to the headquarters of Samaritan’s Purse in Boone, N.C. The staff asked Graham to come down.
“When he saw the boxes and knew who they were from, he immediately asked me if I would go to Bosnia with him to help deliver the boxes,” Damron said. “They were bombing the whole time we were there, in Sarajevo.
“I had prepared myself for the children, but one of the things that shocked me when I got there was the total devastation of the adults. I have never in my life seen such brokenhearted women or men who looked so tired. Even the young teenage boys looked so drained.
“I just think it’s a wonderful program,” she said. “It’s a way of telling them that they are loved and they are special, and regardless of what they are going through that God still loves them and that people do care about them. It also blesses the parents so much, because they want to know who gave their children that wonderful gift. I believe with all my heart that the boxes bless the parents as much as it does the children.”
Damron got the nickname “Mama Gump” in 1995, when President Bill Clinton called her in West Virginia and asked her to come to the White House and do a press conference.
“I’ve been invited by governors to speak to them, and I’ve met a lot of movie stars,” she said. “All of these things were just like that movie, ‘Forrest Gump,’ so people started calling me ‘Mama Gump.’ Franklin Graham wrote a book, ‘Living Beyond the Limits,’ and in each chapter, he talks about a person he’s met that he feels has impacted the world for the gospel, and I am blessed to be Chapter 3, and it’s entitled ‘Mama Gump: Hillbilly Makes it to the White House’!”
For more information about Operation Christmas Child, contact Fairhaven Baptist Church at (334) 289-0712 or the Bethel Baptist Association at (334) 295-8805, or visit the Web site www.samaritanspurse.com.