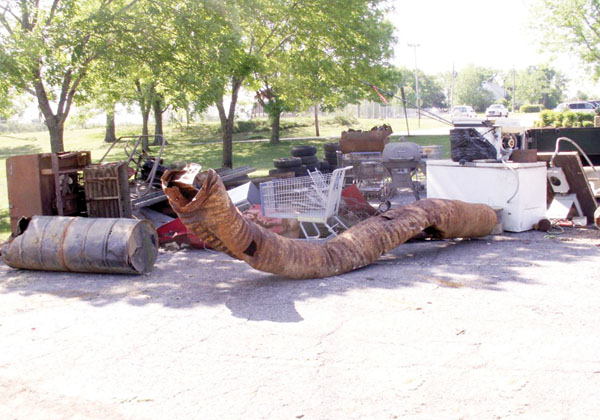 Junk found along the river or in people's homes can be brought to the city landing on Friday and Saturday.

This weekend, the Renew Our Rivers clean-up event is calling on volunteers to turn out on Saturday morning at the city landing to help clean up the banks of the rivers around Demopolis.
There will be another way for Demopolis citizens to help clean up their city by getting rid of their own unused items around their home, kind of like a spring cleaning — just six months later.
Director of public works Mike Baker is asking people to take advantage of the clean-up effort and bring unwanted bulk items to the city landing for disposal. Those items would include mattresses, furniture and refrigerators.
“We’re asking people to bring old items — junk, but not household garbage,” Baker said. “Old refrigerators, other items to clean out the utility room and things like that that they want to throw away can be brought to the river on Saturday morning.
“We’ll have dumpsters there. It’s just like ‘Renew Our Rivers,’ but it’s more like a city-wide campaign, where people may have something that they want to get rid of. We’re going to have a scrap-metal bin where you can throw scrap metal away. Any other kind of junk can be thrown in the big dumpster.”
Baker said that if people have something they cannot bring to the city landing, they should call the department of public works at 289-3879 on Thursday or Friday to come pick it up.
People can bring their junk items to the city landing on Friday from 7 a.m. to 3 p.m. or Saturday from 7 a.m. to noon.
“We’re recycling anything we can,” Baker said. “Any kind of metals are recyclable. We’ll have one container from Rowley Recycling, and anything that we get off the river will be handled by Cemex, and Alabama Power disposes off the big items.”
This Friday and Saturday will be a great city-wide and river-wide clean-up, providing opportunities for people to help clean up the rivers and their homes of discarded items.