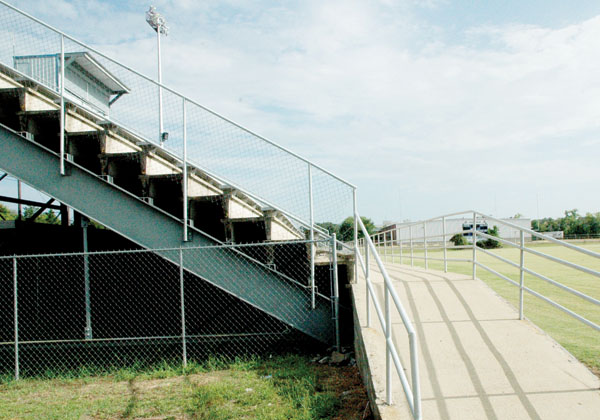 Renovating Memorial Stadium is a proposed capital outlay project for Fiscal Year 2011 for the school system.

The Demopolis City Schools board of education officially approved its budget for Fiscal Year 2011 at its meeting on Monday.
The $20.3-million budget has 79 percent of its expenditures — about $15.2 million — linked to salaries and benefits.
It was announced that board chair Bobby Armstead and board member Laura Foster each received the School Board Member Academy President’s Award. With this year’s honor, Armstead has reached Level 3 in the SBMA, while Foster has attained Level 2.
“We are honored to have our board members attain this level and be certain that they are staying abreast of current issues in education,” said superintendent Dr. Al Griffin.
The board discussed the five-year capital plan for projects throughout the school system.
“We receive a capital outlay allocation from the state,” Griffin said. “Hopefully, we’ll be able to prioritize some of the needs that we have. However, in the event that we have proration in Fiscal Year 2011, which begins Oct. 1, this money is used to offset proration.
“We do have capital outlay projects going at this time with previous revenues, like the Cultural Arts Center, the flooring at the middle school and the demolition and redoing of Memorial Stadium.”
The board also approved a number of policies, including a student driver policy, a report card policy, a reduction in force policy, a promotion and retention policy, an anti-harassment policy and a non-faculty coaching policy.
The board approved the Family Educational Rights and Privacy Act regarding student records, and will work to make parents aware of their rights through FERPA.
“Basically, that allows parents the right to view their child’s academic record,” Griffin said. “It limits who the school system can give those records to as well. It protects the students and the parents and the school system with regards to the student’s records.”
The next meeting of the Demopolis City Schools board of education will be on Monday, Oct. 25, at 5:15 p.m. at the school board office.