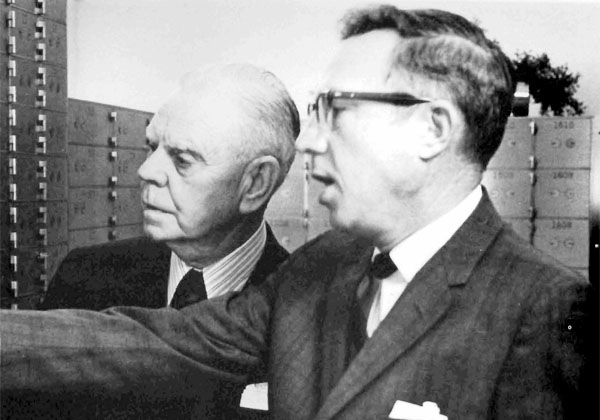 Frederick Oscar “Teddy” Braswell, Jr., passed away on Sept. 13, 2010, having lived his entire life in Demopolis. He was employed at Robertson Banking Company from Jan. 1, 1962, to Dec. 31, 1989, having served as the president of that bank until his retirement in 1989, and was active in community organizations and events.

Prior to working at Robertson Banking Company, he worked in the family business, Braswell Brothers Hardware, which was located on Strawberry Avenue. When that business closed, he was hired at the bank.

“When I moved to Demopolis, Hugh Lloyd and Teddy hired me for my position,” said John Northcutt, chairman emeritus of Robertson Banking Company. “So, I will always be indebted to them for that.

“He was always very affable, very easy-going and easy to deal with. I just have fond memories of Teddy and all my relationships with him.”

“He was a great person to work for,” said Florence Flowers, who served as Braswell’s administrative assistant and was an employee at the bank for 40 years. “He tried to please everybody, and he wanted things done right. He loved to meet the people; he would come and talk to them and make them feel welcome.

“He was such a good person. It’s a big loss to the town and to everybody. I visited with his children (Wednesday), and they are such a good example of him raising his family.”

“He couldn’t have been a better boss,” said Carole Minor, RBC senior vice president of operations. “Sometimes, we’d be here working late at night or on the weekends, and he was right here with us. If there was something he could help us with, he would help, and if not, he brought in food for us. He was just very thoughtful and considerate.”

Funeral services will be held at First United Methodist Church in Demopolis at 11 a.m. on Thursday, Sept. 16. Dr. Art Luckie will officiate the service.

He was preceded in death by his parents, Fred O. and Maurine Braswell; a brother, Samuel Neilson Braswell; and his wife of 60 years, Virginia Tolman “Wee” Braswell.