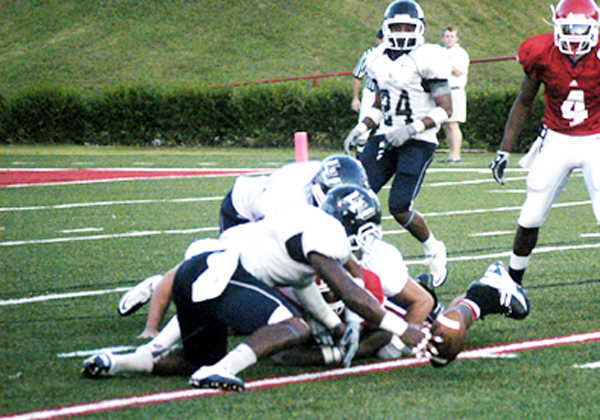 Lambuth's Jamie Payton recovers a fumble at the Eagle 21 Saturday night. The miscue was one of six turnovers committed inside the Lambuth 25 by UWA in the game. -- Jeremy D. Smith | The Demopolis Times

LIVINGSTON — Lambuth ducked destiny repeatedly Saturday night, forcing six turnovers inside its own 25 yard line before getting a timely run from Marquis Williams to down West Alabama 14-13.

The pivotal possession of the game came after Jamie Payton pounced on a fumble at the Lambuth 16, stunting a UWA drive that appeared bound to ice the game. The Eagles cashed in one Payton’s alertness four plays later when David Ingarm pitched the ball to Williams, who carried it 77 yards untouched to the end zone. Nate O’jibway connected on the extra point attempt to put Lambuth up 14-13 with 1:23 to play in the game.

“The fullback, B.A. Davis told Coach (Ron Dickerson) to call that play,” Williams, who rushed for 149 yards in the contest, said of his sprint. “The defensive end was crashing hard all night long. (Davis) told Coach to fake it to him and we’d have the belly pitch. I got the ball and I just saw nothing but field.”

The sequence came nearly three full quarters after Lambuth’s first score, which came on a 13-yard touchdown pass from Ingram to 6-8 receiver Rod Jefferson on the first play of the second quarter. The touchdown toss capped a 14-play, 79-yard drive that was set up Jordan Jackson intercepted a pass at his own 15 and returned it out to the LU 21. The pick was the second of the first quarter for Jackson, who stalled West Alabama’s first drive of the night with an interception at the Lambuth 14.

UWA experienced much of the same on its third possession of the game when Lambuth’s Darius Buckley stripped the ball from Mark Weathersby. Payton pounced on it at the LU 21 for his first of two fumble recoveries.

“They just continue to go after them and never quit,” Dickerson said of his players’ tenacity on defense.

“I’ve never been in a game like this where you dominated a team so much and didn’t win it because of turnovers,” UWA head coach Bobby Wallace, who replaced Dickerson at Temple University in 1997, said. “I’ve never seen it before like that. It seemed like every time we were on the move and fixing to score, we just have them the ball.”

UWA overcame its own blunderous penchant briefly in the second quarter when it went 90 yards on 13 plays to tie the game with a 13-yard scoring run by T-Ray Mitchell and a Brock Sharp extra point.

The Tigers took the 10-7 lead with 9:26 to play in the third quarter when Sharp connected on a 28-yard field goal. Less than three minutes later, the Tigers had pushed the ball all the way to the Lambuth 17 when Sterling Williams forced a fumble that found its way into the arms of Sterling Williams.

Sharp connected on one more third quarter kick, hitting a 37-yarder with 46 seconds left in the period to put UWA up 13-7.

Will Walker forced and recovered a fumble at the LU 4 that halted the Tigers’ first drive of the fourth quarter. The second UWA offensive series resulted in the Payton’s second recovery of the game.

West Alabama did not punt all night, held the Eagles to 221 yards of total offense and accumulated 534 of its own but still fell to 2-1 with its second loss to the Eagles in as many years. Deon Williams went 25-for-39 through the air for the Tigers while Mithcell rushed for 188 yards on 23 carries.

UWA plays its next game at home Thursday night against West Georgia.

“The good thing is it does not count toward the Division II playoffs,” Wallace said of the Lambuth setback. “We’ve got to make sure we’re not a tired football team come Thursday.”