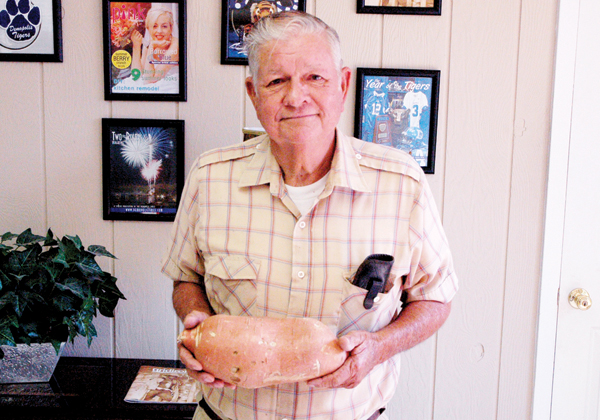 Curtis Taylor of Forkland has only been growing sweet potatoes for a couple of years, but it seems like he has a good understanding of what he’s doing.
“I’ve got three little rows, and I think I made four wheelbarrows out of it,” he said. “I probably made about 10 or 12 bushels out of that — which is a lot of potatoes! I just raise them for a hobby.”
Taylor has a sweet potato weighing 4 pounds, 9.5 ounces and about 16 inches long, one of many large-sized tubers he pulled from his garden.
“I have my garden beside some fish lakes,” he said, “and I pump water out of that lake to irrigate it. I believe that’s what does it.
“There’s a man who tests our water from Tuscaloosa, and he says he puts that water on his flowers, and you can’t believe how they grow!”
Taylor pulled his prize sweet potato on Sept. 14, and lets it cure out for about a month.
“We made a couple of big ones and a bunch of little ones, too,” he said.
Taylor said he plans on eating the sweet potato.
“I’ve got a bunch more to eat with it,” he said.
Taylor’s experience with potatoes didn’t start out very good, but things got better over time.
“I started raising potatoes a year or two ago,” he said. “I couldn’t get the potatoes here in Alabama, so I went to Philadelphia. It’s Puerto Rican reds that we try here. They’ve got a real dark orange in them, and when you bake them, juice just runs out of them. They are real good.
“People who are older than I am mount them up in straw and dirt, and they put cornstalks over them, and they claim that they will keep all winter, so I’m going to try that.”