More than 100 students turn out for clean-up 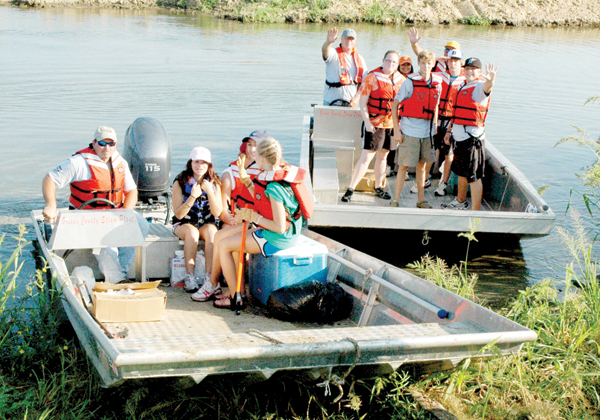 Two boats with student volunteers cast off at the city landing to clean up the river banks on Saturday as part of this year's "Renew Our Rivers" program.

More than 150 volunteers turned out at the Demopolis city landing on Friday and Saturday to assist with the annual “Renew Our Rivers” river clean-up.
The cooperative effort organized by the Greene County Steam Plant, Alabama Power and the U.S. Corps of Engineers had students taking boats along the river, cleaning up trash, tires and anything that did not belong in the river.
Rowley Recycling also provided bins for recycling junk and other recyclables.
Most of the volunteers came from Demopolis High School or Demopolis City School.
“We rode out for about an hour,” said Demopolis High School student Timmy Murphy. “We went into the little canals, and we actually saw a road that we walked up on and picked up trash around the parking lot near Foscue Park.”
“I feel good about doing this,” said Demopolis Middle School student Denzel Robinson. “This was my first time to do this.”
Most of the students took part in the clean-up as part of the clubs and organizations that they belong to, including Anchor Club, Beta Club, Boy Scouts, Key Club and others.
“We got quite a bit done on Saturday,” said Bob McCants of the Greene County Steam Plant. “We got a total of 20 buoys, and more metal this year than what I thought — more than we got last year.
“We got three dumpsters full of garbage and trash this weekend. We’ll recycle all that we can, and plans are now that we are trying to come up with a place to put the money (from recycling) to use in the community. This will be the first time for us to do that.”
McCants said that a lot of the people who volunteered last weekend also volunteered in years past.
“The same teachers at Demopolis High School help us each year,” he said. “We planned on having 50, but we ended up with a little more than 100. There were quite a few people, more than I expected.”
Renew Our Rivers is in its sixth year in Demopolis, and McCants said it remains popular each year.
“I think it’s doing real good,” he said. “I think we’re getting a lot less material now than we used to. We had 78,000 pounds in the first year, and now, it’s down to 14,000 pounds last year. There is a lot less material on the river; we don’t find the large material like we used to. There’s a lot of hand trash, and not so much of the big material.”
Cleaning up the river benefits us all, from improving on the look of the river banks for our own enjoyment to helping to promote the area for prospective business. The people who turned out to help with the clean-up weren’t paid for their work, but it will pay off in the future.