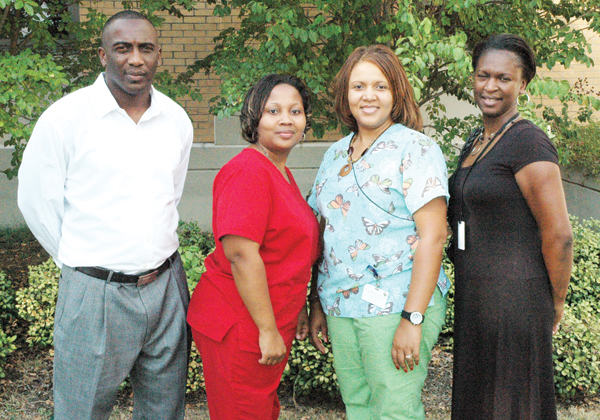 Last Thursday night, as the John Essex High School volleyball team was boarding its bus to return to Demopolis after a 3-0 loss at Sweet Water High School, freshman Shantina Wheeler passed out and stopped breathing.
Teammates alerted coaches about the situation, and JEHS athletics director Donald Constant responded quickly.
“I was walking around my car and getting ready to go home, and one of the kids said, ‘Shantina fell out,’” he said. “I noticed that when they carried her off the bus and laid her on the ground there, that she wasn’t moving. I told Ms. (Taneese) Evans, the volleyball coach that she’s not breathing, and I told Ms. Evans that we needed to prepare to give her CPR. I told Ms. Evans that I’ll do the breaths and she will do the compressions.”
Constant told the students to call for paramedics and asked the crowd if there were any medical personnel in the gym.
The ambulance from Sweet Water was on a call outside the city and could not arrive immediately.
“By the time I was getting ready to perform CPR, two nurses came up, and they checked her pulse,” Constant said. “She had a pulse, so we started rescue breathing. I gave her two breaths, and she started to cough. If it weren’t for those two nurses, I would have panicked, but they walked me through the process. Shantina opened her eyes for a minute, then she went right back out.
“We evaluated her again, and she wasn’t breathing, so we gave her two more breaths and then another one, and she started coughing again. We went through that for 20 or 25 minutes before the ambulance got there.”
The two nurses were Lolethia Hosea and Stacey Hosea, who work with Amedisys Home Health Care. Lolethia works at the office in Thomasville and Stacey works at the office in Demopolis.
“It seemed like every time we did that, she stayed conscious a little bit longer,” Constant said. “When the ambulance finally got there, she remained conscious for the duration, but she was going in and out for 20 or 25 minutes.”
Coaches are required to be certified in cardiopulmonary resuscitation, but Constant said that the emotions that run through this kind of situation make it difficult to remember what was taught.
“If it wasn’t for those nurses — I don’t know,” he said. “It was difficult to remember everything you’ve been taught when you’ve got a kid that you’ve taught for a long time that you like and care about. A whole lot of stuff was going through my mind, but they were the ones who got us moving through the process.
“We had just had our training in Linden a month ago, and I had some prior training in the military. This was the first time — and hopefully, the last time — that I have ever used it.”
What is amazing is that neither Constant nor the two nurses had planned on attending that volleyball match.
“That was the first volleyball game I’ve ever gone to,” Constant said. “I missed the first two, but I thought I should go down and show support for them. Something just sent me down there.
“I thought the match was in Linden, so I went to Linden and didn’t see anybody there. I called Ms. Evans on the phone, and she said, ‘We’re in Sweet Water,’ and I thought, ‘Oh, man, that’s another 15 minutes away.’ I almost decided not to go, but something told me to keep going. I don’t know what it was, but something kept telling me to go to that game, and it turned out that I could be of some help.”
“We had planned on being at a class in Gilbertown, but the class was cancelled by the teacher, and we just ended up being there, at the right place at the right time,” said Lolethia Hosea, who is Stacey Hosea’s sister-in-law. “Stacey’s daughter, Kyarra, plays volleyball there, and I had told her, ‘The first chance I get, I’m going to see you play.’
“It’s just being in the right place at the right time. It was just a miracle.”
Wheeler was brought to Bryan W. Whitfield Memorial Hospital that night, and was released on Tuesday.