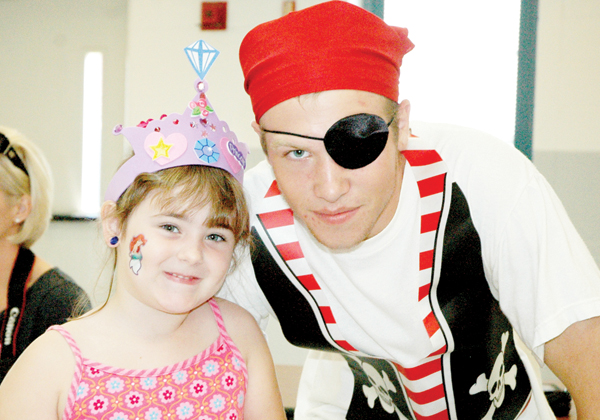 Princess Malin Cain and pirate John Womer had a great time at the Tiger Arts Guild's breakfast fundraiser on Saturday.

The Tiger Arts Guild held a fundraising breakfast at the Demopolis High School cafeteria on Saturday that consisted of scurvy dogs, buccaneers and princesses of all kinds — that, and pancakes, sausages and a drink.
The Tiger Arts Guild is the support group for the arts in Demopolis City Schools which is in its fifth year at DHS.
“It has been wonderful,” said DHS drama teacher Jody White. “The children have had the best time, making their own tiaras and having the treasure hunt, going over there and opening their bags immediately. All the kids have been interacting with our princesses and pirates and having sword fights with the pirates. Everybody had a wonderful time, and I think our students had as much fun as the younger kids!”
The breakfast was so popular and well-received that the Tiger Arts Guild plans to make it an annual event.
“As time goes on, we may expand it,” White said. “I think, for the first time having a ‘Princesses, Pirates and Pancakes,’ that it has been a really fun time for everybody. It’s a great way to show people why the arts are important. The people who came were actually able to be a part of the performance that we did.”
White said she appreciated the tremendous turnout and show of support from the community.
White said that although “The Pirates of Penzance” may not be on the near schedule for the drama club, another pirate-plagued production may be coming soon.
“After ‘Hairspray’ is done and we have our new facility next year, ‘Peter Pan’ is on our list,” she said.
“Next up for us is ‘Godspell,’ and we’ve really done a great job with our Theater Design II class, working on how to turn the gym space into a performing arts space. I think it’s going to work out just fine in the gym. Then, in December, we’ll have our Supper with Santa, and all of the students will be dressed up like elves and we’ll have a little Santa’s Workshop and the children can visit with Santa.”
“Godspell” will be performed in the DHS gymnasium on Oct. 14, 16 and 17, with performances at 7 p.m. on Oct. 14 and 16 and at 2 p.m. on Oct. 17.