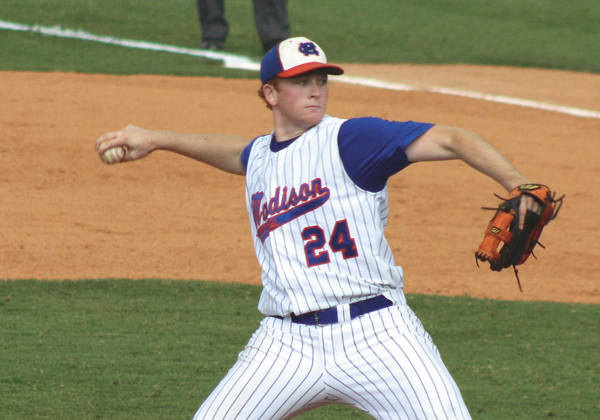 Spencer Turnbull will be getting back to his roots after graduation, having committed to continue his baseball career at the University of Alabama.
“It feels great,” Turnbull, who was born in and still maintains close times to Demopolis, said. “I’ve always wanted to play baseball at any SEC school. Alabama probably would have been my first choice.”
Turnbull, who is the grandson of Demopolis mainstay Dr. Paul Ketcham, moved to Madison, Miss. in the fifth grade. He donates his athletic talents to the high profile Madison Central baseball team, a program notorious for cranking out Division I talent. Turnbull becomes the latest in that line, but has broken away from the trend of heading to a Mississippi university.
“I grew up in Demopolis. I was always a Tide fan,” Turnbull said. “I kind of wanted to be different from everybody over here.” Turnbull chose Alabama over Ole Miss in a decision over which he said he labored for much of the summer.
“It was a  tough decision between the two,” he said. “It’s nice to be able to relax and focus on my senior season.”
Turnbull still frequents Demopolis, visiting family and friends. And while the close proximity the University of Alabama has to his loved ones did not clinch the decision for him, he acknowledged that distance did play a key role.
“I spent 11 years of my life there,” Turnbull, who will forego the athletic scholarship in favor of the academic award he will receive for having a 32 on the ACT and being a national merit semi-finalist, said. “I have a lot of family and friends there. Being able to stop by and say ‘hello’ to my grandparents and aunts and uncles is nice.”
The commitment also means Turnbull will attend the same university his mother, Missy, once called home.
“I’m thrilled. I’m an Alabama grad, so I am thrilled,” Missy said. “He lived (in Demopolis) until fifth grade. So he still thinks Demopolis is home. (His family in Demopolis is) thrilled. My parents live an hour away (from Tuscaloosa) and they feel like they’ll get to see him more.”
At Alabama, Spencer will serve as a starting pitcher but may also get an opportunity to contribute offensively.
“It’s primarily for pitching, but they definitely want me to hit too,” Spencer said. “I’ve been hitting better lately and they’ve heard about it, so they are going to give me a chance to be a two-way player.”
For now, Spencer will focus on helping Madison Central capture that elusive state championship as he tries to rebound from a wrist injury that sidelined him for most of his junior season.
“I still have pain in my wrist, but it doesn’t affect me playing baseball or anything,” he said.