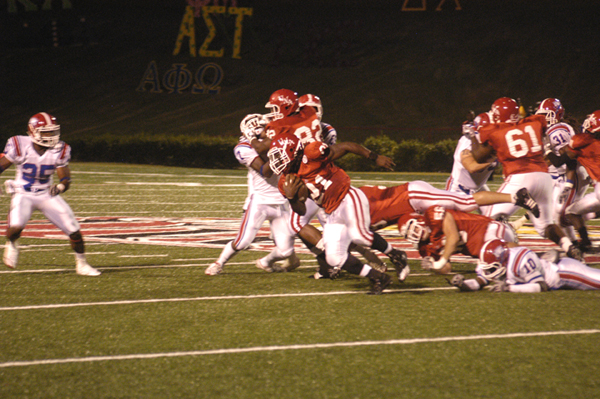 LIVINGSTON — The Tigers got contributions from all over as they quickly put to rest the bitter memories of Saturday’s upset loss by downing West Georgia 28-7 to open Gulf South Conference play.

UWA head coach Bobby Wallace had a sense of deja vu late in the game as his Tigers lead 13-7 in the third quarter.

“It’s so ironic that the score was exactly the same going into the third quarter,” he said comparing the circumstance the UWA’s previous game, a 14-13 loss to Lambuth in which the visiting Eagles scored on their final play from scrimmage to hand the Tigers their only loss of the year thus far. “It was scary until we got some points.”

UWA’s Bryant McGowan and the Wolves’ Manny Rodriguez picked off passes on consecutive plays in the first quarter, leaving the game at a scoreless stalemate until the 2:54 mark when the Tigers’ Brock Sharp connected on a 40-yard field goal to cap a 33-yard rive and put the home team up 3-0.

West Georgia answered early in the second quarter when Brandon Behenna found George Summerset to cap a 13-play, 99-yard drive and give the Wolves their only lead of the night. Despite the chants of “block that kick” from the UWA student section just beyond the goal post, Mark Bardenwerper drilled the extra point to push the advantage to 7-3.

Sharp came through for the Tigers again at the back end of the second quarter when he connected on a 39-yard field goal attempt to stretch the UWA advantage to 13-7 with three seconds to go in the first half.

The scoreboard remained unchanged until the fourth quarter when West Alabama’s Deon Williams found Kendrick May on an eight-yard touchdown pass to culminate a four-play, 64-yard drive. Williams then hit Gerald Worsham for the two-point conversion to put UWA out in front 21-7.

The Tiger defense added the exclamation point on West Georgia’s ensuing possession when Deon Lacey picked off a fourth down pass and spun his way to a 50-yard return for a touchdown. Sharp’s kick rounded out the scoring.

UWA’s superlative performances included Worsham’s receiving effort, which saw the veteran haul in 11 passes for 184 yards, putting him fourth in school history for receiving yards in a single game. Vonzell Jackson led the way for the defense with 13 total tackles and three of the Tigers’ four sacks. The other came via the services of Shontral Ford.

The Tigers also won the turnover battle for the first time all season, adding to the McGowan interception with fumble recoveries by Ford and Lindsey Spinks. Yet, with all of the impressive numbers across the board, it was the punting unit that most impressed Wallace.

“We excelled tonight in the punt team,” Wallace said of a group that entered the night averaging only 10.5 yards per punt. “That was the highlight of the night for me.”