Hospital hosts ‘State of the City’ 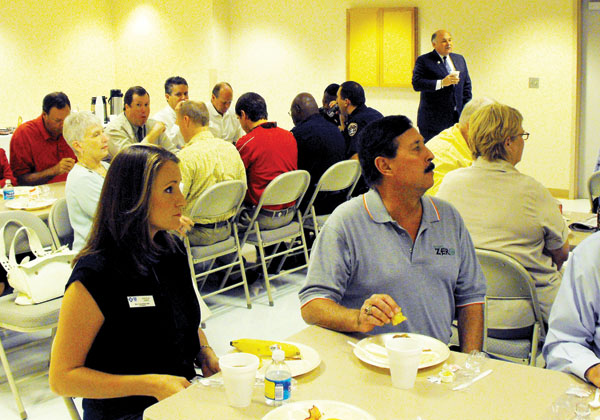 The Demopolis Area Chamber of Commerce sponsored “State of the City” Thursday at 7 p.m. at the Bryan W. Whitfield Memorial Hospital classroom.
A breakfast was served to those in attendance, and Demopolis mayor Mike Grayson gave participants a breakdown of the city’s budget and commercial prospects.
“There were about 75 people there,” Grayson said. “We talked about where we’ve been, where we are now, perhaps where we are going. We talked about four key areas: physically, financially, psychologically and fundamentally.
“We talked about the budget for this coming year, which is $9.8 million, and the fact that we have $4.3 million in reserves, which means that if everything just went down the drain, we could still operate for six months.
“Sales tax receipts for August 2010 are about even with July 2010, but compared with August 2009, we are up 9.67 percent.”
The hospital classroom was almost filled to capacity, and the participants generally enjoyed the morning event.
“I think it was received well,” he said of Thursday’s event. “No one seemed disgruntled or dissatisfied. Overall, it went very well.”
Grayson said he wanted to have town hall meetings in fall and spring, planning the next town hall meeting for May 9, 2011.